Beauty and the Beast is a new CW TV series that is set to premiere on Thursday, Oct. 11, 2012 at 9/8 p.m. CST. Loosely based on the 1987 series of the same name, it stars Kristin Kreuk (Smallville) as Catherine “Cat” Chandler and Jay Ryan (Terra Nova) as Vincent Keller.

Related story Winter Is Postponed 2 Years, So Kit Harington Is Moving On to Another Show
Tune in this fall to The CW 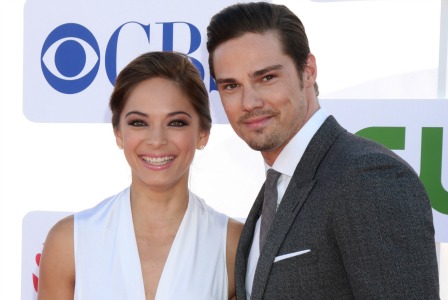 We all know that the beauty and the beast will end up together, but will there be a love triangle along the way? Cat is also close to her coworker — the handsome medical examiner, Evan Marks (Max Brown, The Tudors) — and they have a very flirtatious relationship.

Cat (Kristin Kreuk) witnessed her mom’s murder when she was young. We know that it was the beast who saved Cat, but it will be interesting to see if Cat can solve the case (with the help of Vincent) so many years later.

Find out what’s on TV this fall >>

Cat and her partner, Tess Vargas, (Nina Lisandrello, Nurse Jackie) make an awesome team. It’s great to see women working together instead of against each other on TV shows. Will Cat’s secret about Vincent drive a wedge between them?

As Cat becomes closer and closer to Vincent while he helps solve her cases, it will become increasingly difficult for the duo to keep Vincent’s secret. Will he be able to remain a mystery and lurk in the shadows? Is there a cure for his rage?

Like all The CW shows, Beauty and the Beast is full of beautiful people who are fun to watch. With hunks like Jay Ryan and Max Brown leading the way, there’s plenty of eye-candy on this show.

The show is very loosely based on the beloved 1987 CBS series of the same name, which starred Linda Hamilton as Catherine and Ron Perlman as Vincent. The main difference between the two shows is that Vincent was a beast on the outside in the former series — something Cat needed to look past. This time, the scenario is not exactly the same. In the 2012 series, the beast only becomes beastly when he’s enraged. Fans of the original show might not be thrilled with this primary difference, but should give the show a chance. With a beautiful cast and quality writing, the new Beauty and the Beast may find its way onto your must-watch list this fall.