The new reality show by TLC follows the lives of five young people who leave their families and faith. But it may be as made up as a lot of other “reality” shows. 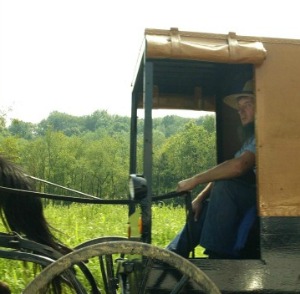 We are well into the era of reality television, and it seems like everything has already been done. But at first glance, TLC’s new show Breaking Amish looked to be something new. The show follows around a group of young Amish people as they leave their families and make their way to New York City.

But for this reality TV show, the Daily Mail is questioning how much “reality” they actually put into it. “While each cast member claims to have grown up in the strict communities, evidence has surfaced suggesting they have decidedly dark pasts — involving divorce, children and time away from the faith,” said the newspaper.

The characters on the show are all different but show varying levels of naivete because of their culturally isolated upbringing. “TLC has previously admitted that Kate, who is billed as an Amish bishop’s daughter and aspiring model, has been arrested for a DUI, but now new information paints an even more rebellious picture,” said the Daily Mail.

The Daily Mail continues by saying that Kate had been submitting her photos to modeling agencies before she says she left her Amish family. Her DUI mug shot shows a much more modern woman —one who is even wearing makeup.

“Two other cast members, Rebecca and Abe, are portrayed as meeting for the first time on the show — with a possible love match on the cards,” said the Daily Mail. “But a photograph apparently shows that the pair in fact already have a child together.” Abe was also arrested for public intoxication four years ago.

The Daily Mail is using testimony from witnesses as their proof, but they do have mugshots, a baby photo and photos of various indiscretions committed by the cast members. There is also a new Facebook page called “Breaking the Amish Truth,” which is attempting to debunk the show and has uncovered the pasts of the five cast members.