Related story Winter Is Postponed 2 Years, So Kit Harington Is Moving On to Another Show
Tune in to Chicago Fire this fall 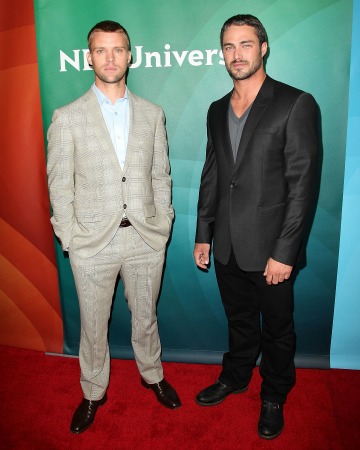 Chicago Fire follows a group of firefighters, rescue squad and paramedics from Chicago’s Firehouse 51 as they respond to a variety of emergencies and deal with their own personal dilemmas. Here are six reasons why you should tune in this fall.

If you’re the kind of gal who loves a man in uniform, you’ll be happy with Chicago Fire. Jessie Spencer has traded in his lab coat from House for a firefighter uniform and he still looks as hot as ever on Chicago Fire. And if you loved Taylor Kinney on The Vampire Diaries, you are sure to want to see even more of his hot body and charming good looks at the fire station. If you aren’t yet familiar with Charlie Barnett, you will be soon enough. Even if you aren’t into the firefighter storyline, you’ll at least have something hot to see with Chicago Fire.

Lt. Matthew Casey (Spencer) and Lt. Kelly Severide (Taylor) blame each other for their comrade’s death. With two completely different personalities, but both strong-willed, it will be interesting to see how their relationship plays out and how it will affect everyone else at the station.

Fighting fires and saving lives week after week — you know this show will have plenty of intense action. This series is set up to be very compelling and very engaging for both women and men to watch.

From Matthew trying to repair his broken marriage to Kelly’s next sexual conquest, we’ll all have our eyes glued to the screen to see what relationship is going to ignite next.

Everyone loves a good ensemble cast — especially one with plenty of camaraderie. And no matter how often they butt heads, when it comes down to it, they all have one thing in common that bonds them together: their jobs.

Everyone wants to know if Chicago Fire will be as good as the other amazing NBC dramas of the past — ER, Hill Street Blues and Law & Order. “It’s hopefully in the tradition of these shows that have become, for better or for worse, iconic,” producer Dick Wolf said recently. “These shows are never written down to the audience. It all goes back to the writing. There’s never been a good show with bad writing, and there’s few bad shows with good writing. Quality does out… The secret of success on television is writing. That’s it.”

What new television show are you looking forward to the most this fall? Leave us a comment below and let us know.