The new TV season is upon us and if there’s something to get excited about this fall, it’s the men of the new NBC drama, Chicago Fire. In addition to being good actors, they aren’t bad to look at either.

Related story Winter Is Postponed 2 Years, So Kit Harington Is Moving On to Another Show
Turning up the heat 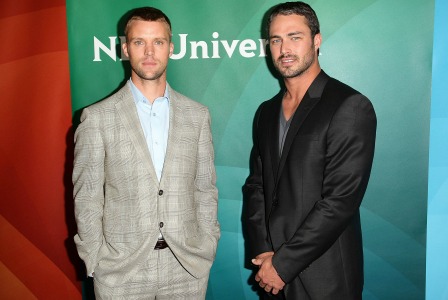 You probably know Jesse Spencer best as Dr. Robert Chase on House. Australian-born Spencer portrayed the character for eight seasons until the show ended earlier this year. Now, Spencer stars in Chicago Fire as Lt. Matthew Casey. Casey is dealing with the loss of one of his men, relationship issues and the day-to-day stress of his job. Expect Spencer to look just as hot in a firefighter’s uniform as he did in his white lab coat.

You might have seen Taylor Kinney on Trauma or as Mason Lockwood on The Vampire Diaries. If you loved Kinney as a sexy werewolf, you are sure to adore him as a sexy firefighter. He stars on Chicago Fire as the seemingly unflappable Lt. Kelly Severide, who often butts heads with Matthew. As the series progresses, we’ll see how Kelly faces his own demons.

A Julliard graduate, Charlie Barnett has been performing since he was a young child in everything from opera to theater productions. In addition to his accomplished background, he’s also easy on the eyes. Barnett has appeared in a number of feature films, including Men in Black 3, and television shows such as Law & Order: SVU. On Chicago Fire, he stars as a new graduate from the academy, Peter Mills, who comes from a family of firefighters.

London-born Eamonn Walker may be best known in America for his role as Kareem Said — the Muslim leader in Oz. His work on the show garnered a Golden Satellite nomination and a Cable Ace Award for Best Actor in a Dramatic Series. Walker made his Broadway debut in 2005 playing Mark Antony alongside Denzel Washington and Colm Feore in “Julius Caesar.” He’s also appeared in a number of movies, TV shows and theater productions, and his performances are almost always met with outstanding reviews. On Chicago Fire, Walker stars as Battalion Chief Wallace Boden.

It’s Steve Brady — Miranda’s good-hearted husband from Sex and the City. David Eigenberg stars on Chicago Fire as a family man and veteran firefighter. Eigenberg has a number of film credits to his name and had recurring roles on a variety of series other than SATC including Third Watch, The Practice and several others.

Who is your favorite hunk from Chicago Fire? Leave us a comment below and let us know.