A new high-octane drama is coming to NBC this fall — Chicago Fire. From Emmy-award-winning executive producer Dick Wolf of Law & Order fame, the series follows the lives of the firefighters and paramedics at the Chicago Fire Department. 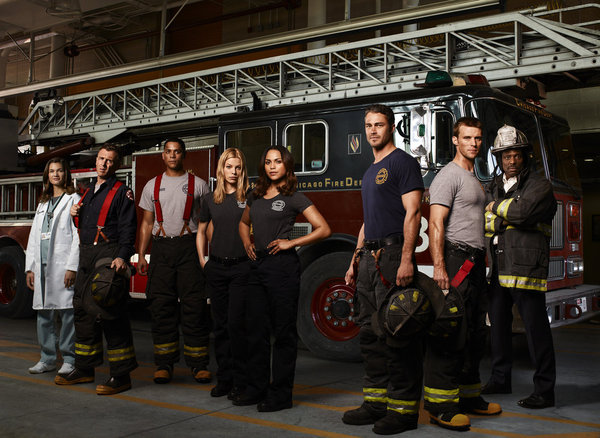 Chicago Fire premieres on Wednesday, Oct. 10, 2012. The show airs on NBC at 10/9 p.m. CST after Law & Order: Special Victims Unit. The series chronicles the lives of the firefighters, rescue squad and paramedics of Chicago’s Firehouse 51. Co-written and created by Michael Brandt and Derek Haas, the pilot was produced by John Roman and directed by Jeffrey Nachmanoff.

Chicago Fire follows the lives of the firehouse employees — in and out of the workplace. As the series begins, after the recent death of a colleague in a fire, everyone is on edge. Two of the firefighters in particular, Matthew (Spencer) and Kelly (Kinney), are butting heads as they blame each other for the death of their friend and team member.

The series is based on an actual firehouse in Chicago, and the cast went through training alongside real-life firefighters to prepare for the show. The pilot was screened for firefighters who gave it their approval. Wolf explained some of them said they were “kind of blown away.”

“There are very few franchises or areas that give you the opportunity to really explore character,” Wolf said at NBC’s Television Critics Association presentation in July. “It’s not fire of the week. It’s a character study about people who do things that you can’t pay people to do. You can’t pay people to run into burning buildings. So it is a canvas for good writing. And writing that you haven’t seen for a while on network television. It is a big, full broadcast show with multi characters and multi storylines going. And the writers’ room could be put in a book about screenwriting.”

Support of the mayor

Mayor of Chicago, Rahm Emanuel, will make an appearance in the series’s pilot episode. Emanuel told the Chicago Tribune: “It’s easier being mayor than playing mayor. I told them I’d do it under one condition: the TV show is making an investment to the Firefighters’ Widows and Orphans Fund.”

Check out the series premiere trailer of Chicago Fire

7 mins ago
by Delilah Gray