The former Mrs. Kutcher tackles yet another obstacle on her road to recovery. 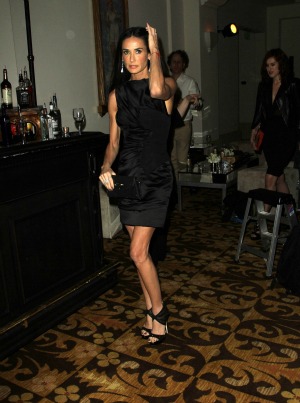 On Wednesday night, actress Demi Moore was photographed leaving the Sunset Tower Hotel in West Hollywood, California. Instead of the bright, healthy figure seen during public appearances in June, Moore looked frail and haggard after having dinner at the Los Angeles hot spot.

This year has been tough for the actress; she has weathered the demise of her marriage of seven years to Ashton Kutcher (after several alleged infidelities) and also the January incident that resulted in an ambulance being sent to her home after she reportedly huffed nitrous oxide. That event led her to a February stint in rehab, where she was treated for an eating disorder and substance abuse.

The recent photos come on the heels of the paparazzi pictures of her former husband and his new girlfriend, Mila Kunis, making out in New York’s Central Park. They were also photographed returning from a Bali vacation earlier in the summer. While neither Moore nor Kutcher has filed for divorce, there seems to be no attempt at reconciliation on the books. There are even questions as to whether they were ever legally married, since it appears they only had a symbolic Kabbalah wedding ceremony.

While the actress has been linked with Martin Henderson, an actor from New Zealand, it appears Moore is out there on her own for now. Her recent looks also have many wondering if she needs a longer stay in rehab to recover from all of the traumas in her personal life this year.

Her support system has also taken a beating since her three children with Bruce Willis — Rumer, Scout and Tallulah Belle — have distanced themselves from Moore because her drama was too much for them to handle.

Whether Moore will seek further help remains to be seen, but judging from the photos this week, she might need a bit of an intervention.