The former Dancing With The Stars contestant pleads “no contest” today in a Florida courtroom in order to escape time in jail. 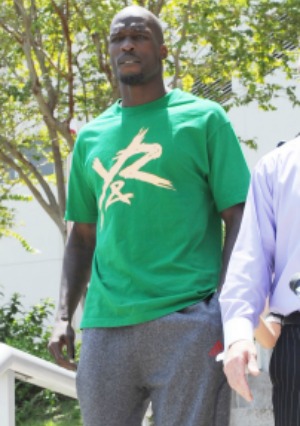 Amanda Bynes and Chad “Ochocinco” Johnson seem to be on the same path these days: lots of legal troubles.

The ex-NFL player appeared in court today to settle his legal issues involving a domestic violence charge against his former wife, Evelyn Lozada. On Aug. 11, the two had an altercation that resulted in Johnson head-butting Lozada. She was hospitalized with a three-inch laceration on her forehead.

Proceedings from the Florida courtroom were carried live on video as Johnson pled “no contest” to the charge of domestic battery against his ex-wife. He accepted a plea bargain in order to avoid jail time, but the judge ordered 12 months of probation and an extensive counseling program.

The former player is not allowed to contact Lozada during the probationary period, including “no e-mail, Twitter, or text.” He will also be required to pay restitution once Lozada’s final medical bills have been established.

The domestic violence case has come at a high price for Johnson. The Aug. 11 events cost him his NFL job with the Miami Dolphins, his marriage to Lozada, his reality show Ev and Ocho on VH1, and his reputation in both the sports and entertainment industries.

On Wednesday, Johnson made an appearance on Showtime’s Inside The NFL in which he stated, “I had an altercation with my wife. I take full responsibility for it. I apologize for it. I’m human and I made a mistake.”

There is no word yet on how Lozada feels about Johnson’s statement and today’s court appearance. Their divorce was finalized on Wednesday, despite Johnson’s attempts to win her back by getting a tattoo of her face on his calf.