Did LMFAO break up? Go on hiatus? Redfoo and SkyBlu had some explaining to do after sending their party-rock fans (and a few haters) scrambling for news Friday.

Related story LMFAO's Redfoo reveals his new DWTS BFF, and our one hint is: ThighMaster 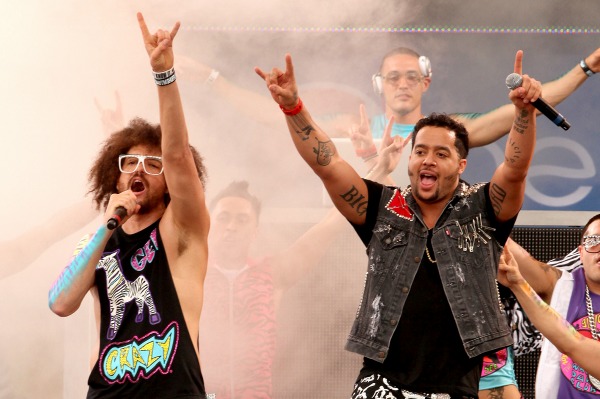 LMFAO broke up? Rumor has it Redfoo and SkyBlu have parted ways after six years of encouraging party rockers to have a good time.

It turs out the LMFAO breakup reports are true — sort of.

“I feel like we’ve been doing this for so long, five or six years,” Redfoo, uncle of SkyBlu, said in a recent phone interview reported in the Huffington Post. “And we’re kind of like saying, ‘Well, let’s just do what’s natural and just kind of explore that, instead of, like, forcing it all the time.'”

LMFAO give props to Paris Hilton >>

Was all not happy in LMFAOland previously? Hard to say, but the 37-year-old confirmed the pair are going in “different directions” creatively.

“I think that we naturally just started hanging with two different sets of people, two different crowds, but we’re always family,” Redfoo (pictured above on the left) added, according to Huffington Post. “He’ll always be my nephew, I’ll always be his uncle.”

For now, it appears the elder LMFAO bandmate is calling the uh, shots, as SkyBlu has yet to make any public comment on the break up/hiatus situation.

As word spreads about LMFAO parting ways, some party-rock fans are heartbroken, while others feel there’s something to celebrate.

“Damn yo it’s a shame foo and sky couldnt figure it out. Sad to see lmfao break up,” wrote one disappointed fan on Twitter on Friday. Another added, “No one could party like dem.”

Cheering the split, no matter how permanent it may or may not be, another tweeted, “LMFAO is finally putting us out of our misery by splitting up. #ThankYou.” A second Twitter user wrote, “LMFAO are splitting up. If only there were a shorthand expression I could use to express my happiness and amusement.”

What do you say in reaction to LMFAO’s Redfoo and SkyBlu parting ways?