They drive race cars, fire guns and always make the kill. They are Bond girls. This sneak peek takes a look at Daniel Craig’s new partners in heels, Naomie Harris and Berenice Marlohe.

This behind-the-scenes look at the new Skyfall takes time away from 007 to talk about the real heroes of the spy world: the Bond girls. Right, ladies…?

Bond’s back from the dead in new Skyfall trailer >>

“I don’t think it’s enough to just look pretty anymore,” said Naomie Harris, who plays Eve, a woman who thinks she’s Bond’s equal and dares to prove it to him. That can only lead to trouble. We like this Bond girl!

Harris came to fame from her work on the Pirates of the Caribbean series. She plays the sexy, mysterious voodoo witch doctor Captain Jack Sparrow frequently visits. She sounds perfect for Eve, the newest femme fatale to be featured in Skyfall alongside Daniel Craig.

Harris’ character is, like all Bond girls, gorgeous, intelligent, seductive and of course very talented at getting out of sticky situations. “With Eve, she’s a field agent, she’s good at driving cars, firing guns. She sees herself as Bond’s equal.” 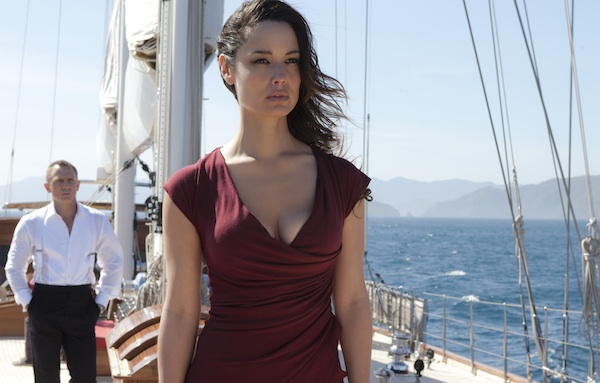 French actress Bérénice Marlohe plays Severine, a glamorous woman whose secret motivations are even more mysterious than Eve’s. “There’s a complexity to her that I like very much,” said Marlohe. “Bond girls don’t look like models, they have a specific look — a look that speaks.”

Their gorgeous co-star, Daniel Craig, agrees. “Finding two exceptionally beautiful girls who are very serious actresses…” Craig said, is the challenge to finding the right woman to play Skyfall‘s Bond girls. He’s no doubt is having fun alongside these two ladies.

A legacy in heels

Harris said it was an honor to be among the actors selected for the part. She is more than thrilled. “There are so many amazing, hugely talented women who have been Bond girls,” said Harris. “It’s a huge honor to be part of that legacy.”