Another Britney Spears–inspired week for the Gleeks and Kate Hudson wearing a bodysuit? How about that new piece of eye candy, Dean Geyer? The second installment of the new season featured so much intensity and excitement, it sizzled! 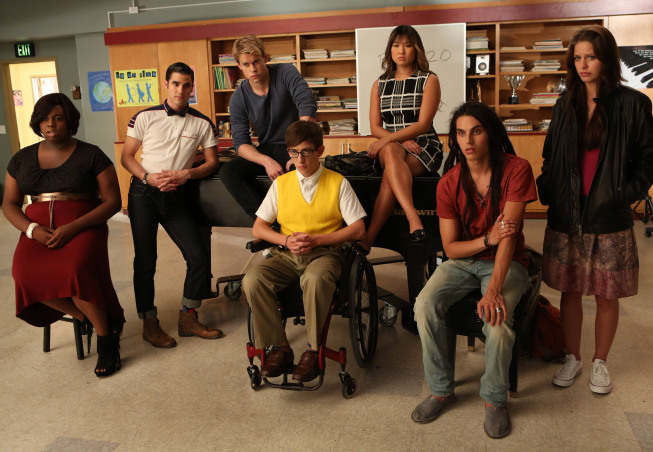 All I knew about Glee before was that a big-nosed annoying girl (Lea Michele) was dating the cute jock (Cory Monteith). And since I’m vainer than Maleficent, I wasn’t interested. But tell me that I may see Kate Hudson and Dean Geyers and an appearance by Sarah Jessica Parker?! I’m already sold on this fourth season, and so far it is a must-see! For old fans, and new ones, this episode was entertaining from start to finish. A few highlights…

Brittany Pierce is cheerleader in the Glee club and gets kicked out for an F–, because she’s as vacant as an abandoned factory

The awkward blonde cheerleading squad capitain was stripped of her title this episode because of “poor grades.” Or that’s the nice way to put it. The harsh truth is that she’s a complete ditz who talks aloud, imagining she’s doing a voice-over. Throughout the episode, you witness that she writes entirely in crayon, alternating colors as she goes (what?!).

Since she’s famous for her rendition of “Slave 4 U,” the Glee team try to coax her out of her depression with several of Spears’ tracks. One of these, after some coaxing, results in a terrible lip-synch attempt by Brittany while she stuffs cheese puffs in her mouth and dances un-enthusiastically (hilarious!). Amidst a public breakdown, a fellow Gleek recognizes she is self-sabotoging only so she can make a comeback. Who knew she had enough intelligence to plan? You want to hate her, but you can’t.

Cassandra July says Rachel Berry has the sex appeal of Shrek, but the gorgeous Brody Weston begs to differ

Nicknaming Rachel “David Schwimmer” in mockery of her masculine face, Cassandra (Kate Hudson) bullies her into a predictable outburst, because one thing I do know is: Rachel Berry is a whiner. As a result of all this dysfunction, however, viewers get a firsthand look into what made Ms. July the overpowering and overbearing monster she is in dance class. Rachel later apologizes and understands the logic behind her teacher’s harsh methods. But the pivotal moment for Rachel (and our hormones) is when she meets and later attracts the sexy Brody Weston, a junior at NYADA—and a possible love interest? You’ll want to watch their interactions from start to finish: She meets him shirtless, and the episode ends with him baiting her into a kiss.

In summary, Kate Hudson as Cassandra? Flawless. The role fits her as well as the leotard. Rachel Berry leaves me wanting more—and wondering why she didn’t do more with her new eye candy, Brody. Do I need to mention that there’s a shower scene with a six-pack involved?

Jake Puckerman gets to meet his half-brother Puck, who tells him to join Glee—when you figured he was going to do it anyway (to get in Marley Rose’s pants)

Jake is the “womanizer” the ladies refer to during their ode to Britney Spears, and he’s apparently taken after his older, hotter half-brother from earlier seasons. Note to Twilight fans: You may see a resemblance to “Jacob Black.” Back to the brother-bonding: Their moment is precious but a little forced.

Jake had left the audience thinking that he had his eye on a Glee member, the beautiful and quirky Marley Rose, who is oddly vulnerable and relatable. But in what seems like a sudden plot jump, the newly appointed head cheerleader whisks him off during a private moment with Marley, claiming that he’s dating her—it’s a little confusing. Jake still joins Glee. This may have not been the most intense storyline, but it seems it will be a long-term one.

But the tracklist of Britney songs was impressive!

A few featured in this episode:

I’m officially hooked. Makes you wonder: Why didn’t my school have a Glee club with that much swagger?