Stage, big screen and small, Mamie Gummer has covered all media — and now she is poised for serial success in The CW’s Emily Owens, M.D. Now she steps into the star spotlight! 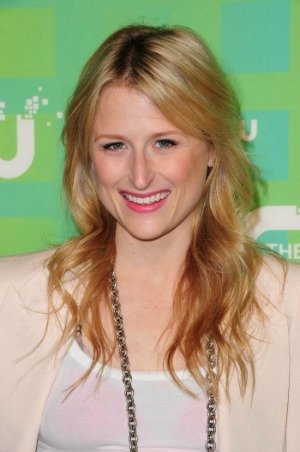 It’s one thing to have a famous mom. It’s quite another to look exactly like that famous mom and make it in the same biz on your own merits — but that is exactly what Mamie Gummer is doing.

To be sure, the actress did technically get her start with a little help from her mom — her first role, at three years old, was in Meryl Streep‘s iconic flick Heartburn — but she was credited under a different name to avoid scrutiny.

After graduating from the prestigious Kent School, Gummer made her way to Northwestern University to study theater and communications. Graduating in 2005, she made her way to New York, where she debuted off-Broadway in Mr. Marmalade with Michael C. Hall, winning a Theatre World Award along the way. She later picked up a Lucille Lortel Award nomination for her role in The Water’s Edge.

“I didn’t follow some kind of Yellow Brick Road to this glittering career,” she told The Philippine Daily Inquirer. “I took pains to do it properly. I feel emboldened and strong that I studied acting. I feel like I know what I’m doing, going from school and straight to theater. Cutting my teeth in New York also helped a lot.”

New clip: Justin Hartley gets Emily Owens in the mood >>

Moving from stage to screen was a natural evolution and in 2007 she stepped into film with a small role in The Hoax with Richard Gere. Later that year, she teamed up with her mom for the second time, playing a young version of Meryl Streep’s character in Evening alongside Claire Danes, Glenn Close and Vanessa Redgrave.

She will next try her hand at serial television, after enjoying guest roles on The Good Wife and A Gifted Man and a starring role on the short-lived series Off the Map.

Gummer is hoping for small-screen success with her upcoming medical drama Emily Owens, M.D., playing the eponymous character, an intern at Denver Memorial Hospital, who must compete with her high school nemesis for career recognition. Debuting Tuesday, October 16 on The CW, Gummer’s Owens is confronted with the realities of a tough career and her med school crush — also an intern at the hospital — all at the same time.

As far as those inevitable comparisons to her mom, Gummer shrugs them off. “I don’t live and breathe and bleed and sweat for it,” she told The New York Times. “I really don’t have to win an Academy Award.”

Catch Mamie Gummer on Emily Owens, M.D., Tuesdays at 9/8c on The CW.

8 mins ago
by Daisy Maldonado