The humanitarians thank you for not gyrating. 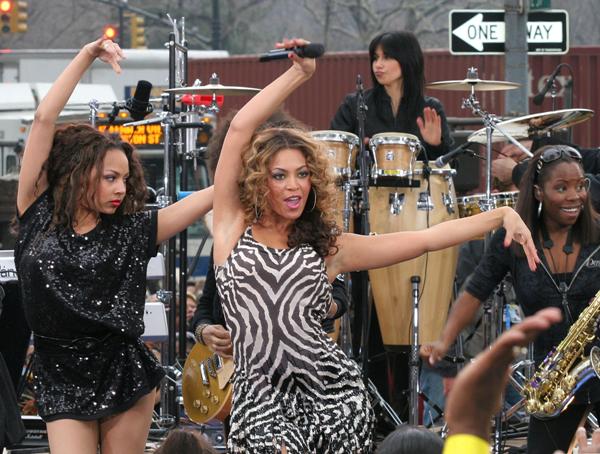 This video confirms Beyonce has some serious pipes (and curves). Perhaps she cut her hours in labor down by singing, and the sheer force of her voice popped Blue Ivy out (if she actually gave birth).

Warning: If you have a conscience, you may cry. In honor of 22 staff from the United Nations who died due to a 2003 embassy bombing in Baghdad, Iraq, the General Assembly designated a World Humanitarian Day to be held on Aug. 19?the anniversary of that tragic day. Beyonce was slated to perform the keynote song, which is named after the theme of the event, “I Was Here.” Rolling Stone reported that the song was written by Diane Warren, whom Bey is now collaborating with.

Using an immaculate graphics display akin to an Apple commercial, Beyonce provided an epic performance in the United Nations amphitheater. The pitch-black room focused attention on the wide screen behind Beyonce. It replayed scenes of heroic humanitarian efforts during recent disasters. The performance evoked strong emotions from the audience — and from me. For a moment, it all made sense to me: The power of Beyonce’s voice and presence in conjunction with the scenes of heroism made this performance an extraordinary experience.

She was also dressed to impress, and fellow fashionistas certainly will commend her choice of attire: a striking, flowing white gown adorned with sequins, featuring a cutout neckline. Can you believe this lady had a baby? What is her weight loss secret?

Don’t get me wrong. Beyonce is a triumphant example of female independence, talent, and success. But I must say her music videos usually have a very common theme: elaborate theatrics with grand displays of gyrating. In short, if she weren’t so famous, most of her videos would be marketable for BET Late Night. Her dancing/seizures in videos like “Déjà Vu” made me wonder if her Dereon jeans had cut off the circulation to her brain. And perhaps like many of you, I haven’t been interested in watching a music video of hers since “Single Ladies.” But thank you, Beyonce, for exhibiting nothing but elegance during this remarkable tribute to a fearless cause.

Beyonce got her hair done to prep for labor