The former Disney star returns to the spotlight with The X Factor and a new campaign aimed at bullying prevention. 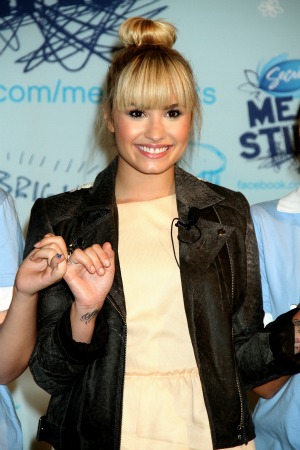 Demi Lovato is proving she is on the road to recovery, and not only with her stint at the judges’ table on The X-Factor. She’s also stepping up with a new anti-bullying campaign. The young star is partnering up with Secret deodorant for a yearlong campaign called “Mean Stinks.” Lovato will act as the campaign’s ambassador and ask girls to “Gang Up For Good” by painting their pinky nails blue to promote “peace and solidarity to keep bullying out of their group of friends,” according to the Procter & Gamble press release.

To launch the program, Lovato showed up today at Young Women’s Leadership School in East Harlem, New York. The move was a surprise to the students, who heard Lovato tell them of her own experiences with bullying and how she was impacted by the words and actions of other students when she was younger. She said, “‘Gang Up for Good’ is a really great way to inspire us all to change the way we think when it comes to being a bully, witnessing a bully or being the victim of a bully.”

Lovato underwent a very public breakdown in November 2010 after punching one of her dancers while out on tour. She entered rehab to get professional help with an eating disorder and cutting issues. Her big comeback is happening this fall with the return of Simon Cowell‘s The X-Factor on FOX.

October marks National Bullying Prevention Month, and to honor its commitment to the cause, Secret is donating $1 for every Mean Stinks Clinical Strength purchase to fund their girl-empowerment program. To find out more about the charity, log on to Secret’s Facebook page.