Time and time again, celebrities are arrested in this small Texas town. Now, Fiona Apple has been added to the list. 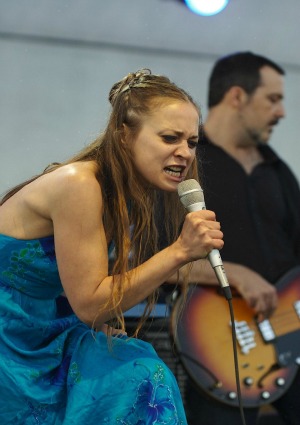 Fiona Apple is again proving that things are tougher in Texas. TMZ broke the story today that the singer/songwriter, best known for her hit song “Criminal,” was arrested at the infamous Sierra Blanca checkpoint today for possession of pot and hashish. Her tour bus was passing through the area when a U.S. Border Patrol drug-sniffing dog detected the scent of marijuana.

Apple was arrested and spent Wednesday evening in Hudspeth County Jail; she was released on Thursday on a $10,000 bond. According to the Hudspeth County Sheriff’s Office spokesperson, Rusty Flemming, the singer “had a little, tiny amount of pot and hash.” No official statement has been made by Apple or her spokesperson, Ambrosia Healy, as of press time.

Apple isn’t the only celebrity who’s been stopped at this West Texas border town. Other celebrities who have been busted for marijuana possession in this location include Willie Nelson, Armie Hammer, and Snoop Dogg.

Apple is currently out on tour with her band supporting her latest album, The Idler Wheel …. She performed on Sept. 18 in Mesa, Arizona, and she was scheduled to perform tonight in Austin, Texas. According to Austin City Limits Live, tonight’s stop on the tour has been postponed, presumably due to the singer’s legal troubles. The concert will be rescheduled for a later date, and all tickets for tonight’s concert will be honored.

Apple’s eyes-closed mug shot was released by the Hudspeth County Sheriff’s Office as well. Based on the photo, it does not look like the singer was too pleased with last night’s events.