Amanda Bynes is in denial about her recent problems — and judging from her new comments, that won’t be changing anytime soon. 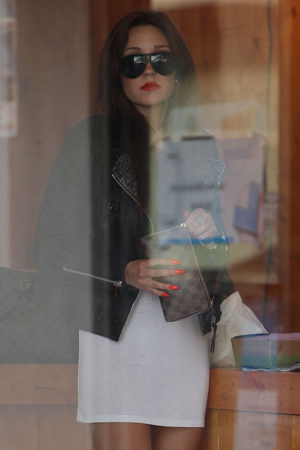 “I am doing amazing,” she said. “I am retired as an actor. I am moving to New York to launch my career. I am going to do a fashion line.”

At least she won’t need a car in New York City, so that’s one good thing she has going for her. However, she wouldn’t talk about her recent troubles.

“I am not talking about being arrested for DUI because I don’t drink, and I don’t drink and drive. It is all false,” Bynes continued.

It’s the same thing she’s been saying all year — she even tried to convince President Obama that she doesn’t drink in a series of tweets earlier this summer.

Think her recent behavior is odd? You’re not the only one: Onlookers and friends are concerned she’s in the midst of a full-on meltdown.

“People around Amanda are really concerned about her,” a source told the magazine. “She tells people she doesn’t party or drink. She doesn’t realize she has a problem.”

Apparently, even her parents are concerned for her: They’ve reportedly relocated from Texas to Los Angeles to keep an eye on her. However, that hasn’t stopped her increasingly erratic behavior. Spies have spotted her talking to objects and laughing at herself — and patrons at Equinox gym in Los Angeles got an eyeful when she stopped in earlier this week.

“Amanda stopped to take her T-shirt off, revealing only a tiny, black, strapless push-up bra — not a sports bra,” an onlooker told People. She spent a few minutes adjusting her bra and “pulled out her makeup kit and started reapplying her lipstick and eyeliner while looking at herself in the large mirror in front of her.”

Most people freshen up at a gym — but they do it in the locker room, not in front of the Ellipticals.

Do you think Amanda Bynes has a problem?