Lady Gaga can’t win: First she was too skinny, now she’s too big. Will it ever end? 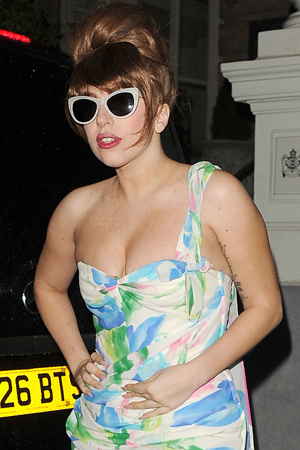 Oh, come on: Apparently Lady Gaga is getting too “fat,” according to RadarOnline. The singer — currently on her Born This Way tour in Europe — has put on a few pounds and now a professional is “weighing” in on her lbs.

“Gaga appears to have gained at least 30 pounds,” nutritionist Majid Ali told RadarOnline. The nutritionist went on to hypothesize that her weight gain is a result of her drinking.

“Alcohol sugars can only be stored as fats. Whereas most sugars can be used as fuel and whatever is left over is stored,” he said. “So all that drinking adds up as fat pretty quickly, no matter what the rest of her diet is like.”

Lady Gaga gets tattoo in front of fans, in giant perfume bottle >>

Gaga has made no secret of her love for booze — she even subscribes to the “drunk diet” developed by her on-again, off-again boyfriend, Luc Carl.

“I like to drink whiskey and stuff while I am working,” she told the Morning Mashup on SiriusXM Hits One. What musician doesn’t? It’s pretty much part of the job description.

We happen to think the weight gain looks good on her 5-foot, 1-inch frame. At least we know she’s eating — we weren’t sure earlier this year when she showed off a rail-thin body. Even pal Elton John was worried.

“I talk to her mum and dad about it,” he told U.K.’s Guardian newspaper. “They worry.”

“She is frail,” John added. “And she doesn’t eat when she should do, and she’s a girl, and it’s tougher for a girl.”

Even Gaga is acutely aware of the challenges of being a woman in the spotlight.

“Just killed back to back spin classes,” she tweeted in April. “Eating a salad dreaming of a cheeseburger #PopSingersDontEat #IWasBornThisWay.”

The tweet attracted criticism, but we’re glad she’s seemed to rediscover her love of cheeseburgers over the summer.