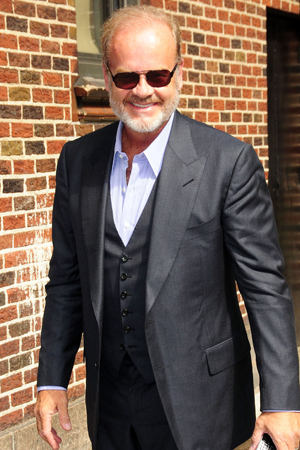 Kelsey Grammer is really tired of talking about ex-wife Camille Grammer. How tired? He bolted on a planned interview with CNN’s Piers Morgan on Wednesday night when a photo of his ex flashed on television cameras.

“Kelsey Grammer was supposed to be on my show now but ran out of the building. Strange,” the Piers Morgan Tonight host tweeted, later adding, “So, Kelsey Grammer saw a photo of his ex wife Camille in the open to our show and legged it. Extraordinary. Never had this happen before. … I like Kelsey Grammer personally, but this was a shockingly unprofessional thing to do. I wasn’t even going to mention his ex-wife!”

Grammer was set to appear on the show to promote the second season of his hit Starz drama Boss. However, his disdain for Camille apparently trumped that of his job.

Maybe he’s just tired of talking about her? The actor wouldn’t even mention her by name in a recent interview with Oprah. We get it: How many scorned exes want to talk about their divorces over and over and over again?

Obviously, the photo was the last straw. Morgan might have tried to play incident, but his rep isn’t buying it.

“Piers needs to take responsibility for what he did to Kelsey. It’s called accountability,” he said.

Let that be a lesson to anyone who wants to talk to Kelsey about his Real Housewives of Beverly Hills ex. Our advice? Talk about the weather, sports — basically anything but Camille.