Aerosmith and Bon Jovi are rock royalty, and with both bands set to play the iHeartRadio Music Festival, here’s why it will be so hard for the other acts to compete. 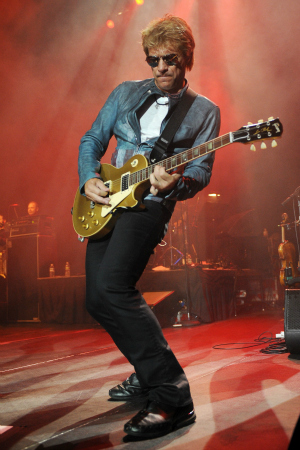 If you’re one of those fickle music fans who only listens to certain genres of music, you probably won’t be jumping out of your seat during performances outside of your preferred styles. Chances are, however, that when Aerosmith strikes up “Sweet Emotion” or Bon Jovi strums the first few chords of “Livin’ on a Prayer,” you’ll be up before you even realize what’s happening. Both bands have several examples of that kind of song — the kind you sing along to without realizing it, the kind that brings back a million memories, the kind that you and your grandma both know the lyrics to. The list goes on and on for these guys. Aerosmith gave us smashes like “Dream On,” “Walk This Way,” “Dude (Looks Like a Lady),” “Janie’s Got a Gun,” “Cryin'” and “I Don’t Want to Miss a Thing.” Bon Jovi’s contributions include “You Give Love a Bad Name,” “Bad Medicine,” “I’ll Be There for You,” “Wanted Dead or Alive,” “Bed of Roses” and “It’s My Life.” Taylor Swift may have a lengthy string of hits under her dainty little belt, but the newcomer hasn’t come close to becoming a cross-generational cult-hit icon quite yet.

When it comes to staying power, Aerosmith has pretty much cornered the musical market. These guys have seen more than four decades come and go —and who knows how many little black books of lovers Steven Tyler has burned through — and can still sell out a stadium faster than you can shake a stick. Bon Jovi boasts rather impressive stats as well. The New Jersey–bred boys have spit out album after album of hit singles since forming their band in 1983. And despite advancing age, both bands boast lead singers who have some crazy breed of undeniable animal magnetism — whether you are 18 or 80, if Steven Tyler or Jon Bon Jovi come a-callin’, you come a-runnin’!

Jon Bon Jovi to create a fragrance line for Avon >> 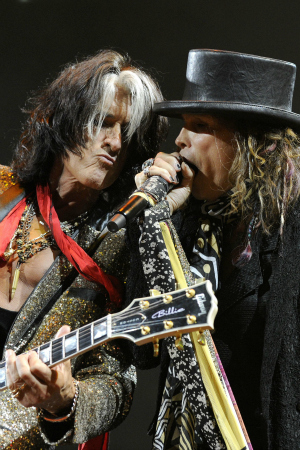 Sheer, unadulterated ability to make people rock out in an embarrassingly public way

At some point, it seems only logical that the people who’ve been caught on camera at an Aerosmith or Bon Jovi concert will look back at the footage and think, “What the hell was I doing?” ‘Cause, truth be told, we were all wondering the very same thing when we saw it. That’s not to say, though, that we didn’t empathize with their overzealous plight. When bands like Aerosmith and Bon Jovi perform, some intangible pull seems to draw fans to their feet. Have you ever seen anyone sitting quietly while watching these guys rock out? It almost feels unAmerican not to give in and just go with the flow. Unfortunately, in this case, the flow often goes in the direction of highly public displays of humiliating enthusiasm — I once saw an elderly woman take off her shirt and tie it around her head like a bandanna at an Aerosmith concert. It just goes to show that these seasoned bands have something that is difficult to come by nowadays and hard to rival — the gift of getting people to live in the moment … even if that moment will be commemorated forever on YouTube.

Another year of Steven Tyler on American Idol? Dream on >>

Want to know who else is (and isn’t) making an appearance this year? Check out…