Tyler’s exit from the show may not have been his choice, but he says he enjoyed his time there and would return if everything was just right. 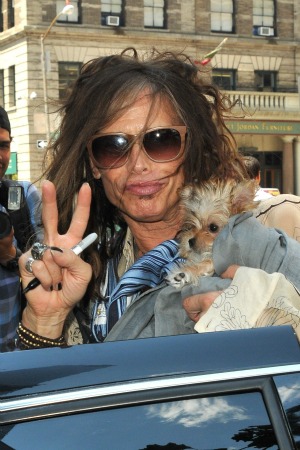 Steven Tyler left American Idol at the end of last season for many reasons, and the musician is now saying he has gone back and forth on the decision (whoever’s decision it actually was). But he felt that, no matter what, he had to devote himself to his band, Aerosmith.

“We’d just come off a tour and I took Idol and I didn’t tell these guys, to be fair, and they got bummed out,” Tyler told Ken Baker with E! News. “We got into a lot of ya-ya because of tumult that happens in a band. Sometimes stuff doesn’t get talked out quite properly, but it always turns out as songs down the line anyway.”

Tyler continued by saying he loved the show and the environment but wouldn’t necessarily want to return in the judge’s seat. He would, however, love to become involved with the show again.

“I wouldn’t go back and be a judge, but I’d be a mentor,” he said. “I loved the fact that you go through 700 people, and out of that, you really can pick someone that has talent, because they have to audition anyway. And I’m just grateful that Jennifer and I and Randy could pick people that wound up being so good.”

The new judging lineup has officially been named as Randy Jackson, Mariah Carey, Nicki Minaj and Keith Urban, a judging panel on which rock stars are conspicuously absent. Tyler was asked for his thoughts on the new judging staff, but he wouldn’t let on.

“We’ll see what happens, right?” he said with a smile.

The 12th season of American Idol (with all its new judges) is set to premiere on Fox in January 2013. Auditions started earlier this summer, presumably without the new judges, with contestants invited to audition in a variety of new ways.