Jimmy Kimmel’s got a prank up his sleeve! The 2012 host of the small-screen awards hasn’t said what exactly will go down — but it’ll be big! 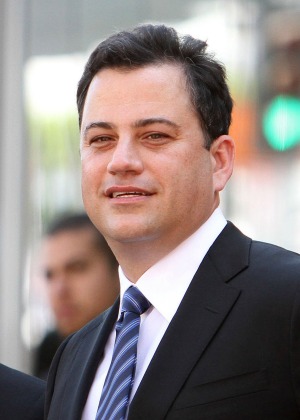 When Jimmy Kimmel was asked to take on hosting duties at the 2012 Primetime Emmy Awards, producers ought to have known they had a prankster on their hands.

Yes, the man who has made children cry with fake lie-detector tests and tales of parents eating all of their Halloween candy is up to his old tricks, though planning for the Emmy prank is reaching epic proportions!

Confriming a rumored Jimmy Kimmel prank is indeed the works, the 2012 Emmy host told Access Hollywood Wednesday, “I can’t really say what it’s gonna be, but it will be a big deal.”

“That’s all I’ll say,” the Jimmy Kimmel Live! host added, before letting one last major bit slip out: “There will be a lot of people involved in it.”

Emmy winners: Where are they now? >>

Touting the big prank in a separate interview with Entertainment Weekly, the host divulged a bit more info.

“I am gonna do something very weird during the show. I think it could possibly be the biggest prank ever pulled, as far as number of people involved. Possibly. I haven’t researched it, but it’ll definitely be right up there. The audience will be a participant in this. So it’s important that you watch, because you’re either going to be in on it or not.”

Jimmy Kimmel is set to wed (and not to Sarah Silverman) >>

Commenting on being grateful for having been given the honor of hosting, the 44-year-old father of two went on to explain, “It’s funny, I grew up and I didn’t have a television set, and now, I said [to my kids], ‘Are you going to watch me on the Emmys?’ — they’re in college — and they said, ‘We don’t have a TV set.’ They watch everything on their computer now. We’ve really come full circle!”

Any guesses about what Jimmy Kimmel’s Emmy Awards prank will be? Do tell!