Rihanna vs. Taylor vs. Pink: Who will dominate the 2012 iHeartRadio Music Festival? Let’s examine. 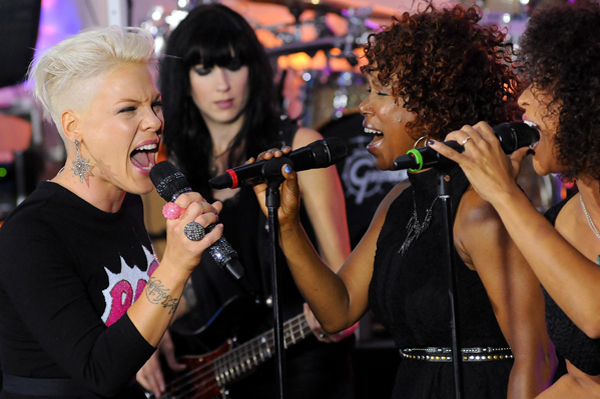 As if the star power behind the 2012 iHeartRadio Music Festival wasn’t strong enough, new presenters have been added to the roster for Friday and Saturday night. Miley Cyrus, Kathy Griffin and LL Cool J will join Ryan Lochte, Britney Spears and Demi Lovato as official presenters at the festival, according to iHeartRadio producers.

“Last year’s iHeartRadio Music Festival had so many acts from so many different genres on one stage, a true rarity for a concert,” Seacrest said of the second annual event. “This year it’s set to be bigger and better, with an unbelievable roster of some of the most talented names in the music business.”

iHeartRadio Music Festival 2011: A look back >>

The iHeartRadio Music Festival is all about mixing classic acts such as Bon Jovi and Aerosmith with country singers and rappers. However, we all know it’s really about the pop music: Rihanna, Pink and Taylor Swift are among the full slate of superstars, after all.

The big question: Who will steal the show? After all, we all know Britney, Demi and Miley are unpredictable, even as presenters. Will they do something crazy on stage? Our money’s on Miley.

However, we think Pink will be the big showstopper at this year’s show. She’s back with her new album, The Truth About Love, and always gives an amazing live show — have you ever seen her trapeze act? Exactly.

iHeartRadio Music Festival: Where the (pre and after) party at? >>

Our favorite part about the platinum blonde singer? She never censors herself… ever. Why? That’s just how she grew up.

“I write from my life, my experience. I’m selfish that way,” she recently told USA Today. “I’m very much in the trenches, and I don’t live in the lap of luxury. I come from a working-class military family. We watch the news and read the paper and vote, so there’s always something to be upset about. I always have a certain amount of angst in my back pocket.”

Get all the iHeartRadio information you need, before heading out to Vegas…