Marge Simspon is an idol in the eyes of Mindy Kaling. The actress reveals how the blue-haired cartoon mom helped lead her to comedy, including her role on The Office and beyond! 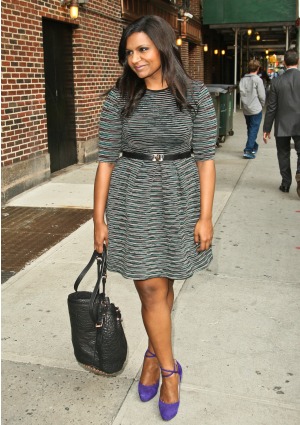 Marge Simpson has been one of television’s best-loved moms for nearly as long as Mindy Kaling can remember. The real-life actress holds a special place in her heart for The Simpsons star, and believes we all ought to give ol’ Marge a little more recognition.

“Growing up, I remember my parents feeling a little wary of The Simpsons,” Mindy Kaling admitted during a recent interview with Glamour.

“This was in the late eighties, and there was a wave of articles about TV shows that were bad for America. Then we all started watching it and loved it. Marge Simpson is the one who’s really funny. Her character looks so crazy, but then she’s supposed to be totally demure. I think [Simpsons creator] Matt Groening is a genius for giving her that hair.”

Mindy Kaling may be best known as Kelly Kapoor on The Office, but the 33-year-old rising star actually began on the sitcom nearly a decade earlier as a writer — the only female writer, to be exact.

The Mindy Project: An unromantic heroine >>

Come Sept. 25, fans of Mindy Kaling are invited to check out the new Fox series The Mindy Project. The show reportedly follows a young ob-gyn with a mishap-filled love life, or as the star and co-producer explains it, “My character is a really busy doctor who is kind of in a state of arrested development because she never had a chance to date.”

“It used to be that you had to make female TV characters perfect so no one would be offended by your ‘portrayal’ of women,” the woman who has since received an Emmy nomination for her writing added. “Even when I started out on The Office eight years ago, we could write our male characters funny and flawed, but not the women. And now, thankfully, it’s completely different.”

For more with the actress, pick up the latest issue of Glamour, which includes photos of Mindy Kaling dressed up as her idol, Marge Simpson!