Clint Eastwood’s gay marriage stance can be summed up in three simple words: “Leave everybody alone.” The Libertarian explained his views on the subject during a recent chat with Ellen DeGeneres, revealing why he hopes his own daughter will end up with a “dweeb.” 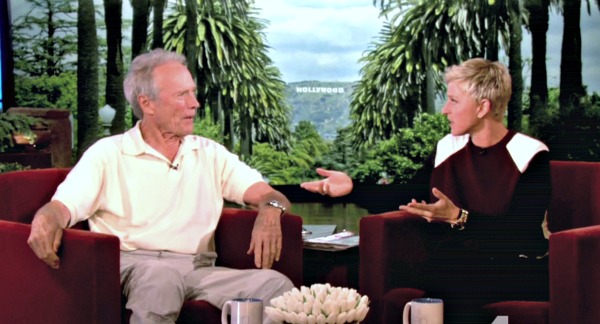 Clint Eastwood‘s gay marriage stance falls right in line with his Libertarian views on most things. Stating multiple times his ideal is for the government to stay out of personal affairs, the 82-year-old sat down for a chat with Ellen DeGeneres on Tuesday.

Addressing the hot-button issue of gay marriage, Clint Eastwood explained he defines himself as a Libertarian, and that his stance on marriage equality is “a part of the Libertarian idea: Leave everybody alone!”

When asked by Ellen to sum up Libertarian views, he shared, “You’re sort of socially liberal, leave everybody alone, but you believe in fiscal responsibility and you believe in government staying out of your life.”

Clint Eastwood continued on the subject of gay marriage, adding, “The condition of society right now, with the high unemployment rates and the tremendous debt we’re increasing, and the government spending, we’d think there’d be a lot to think about worty of — well, except worrying about what gay marriage is about.”

Fans of Clint Eastwood likely aren’t surprised by his gay marriage stance. Last year the veteran actor was quoted in GQ as saying he “doesn’t give a f**k about who wants to get married to anybody else! Why not?! We’re making a big deal out of things we shouldn’t be making a deal out of… Just give everybody the chance to have the life they want.”

When it comes to his own daughter, however, Clint Eastwood has a few opinions and preferences.

Rather than date controversial “artist” Tyler Shields, the actor wishes 19-year-old Francesca Eastwood would settle down with a man of a different temperament.

Referring to the time Tyler Shields lit a Birkin bag on fire in the name of art, Eastwood said with light sarcasm, “He’s the kind of guy everyone wants to see their daughter bring home. He’s lighting up purses and doing all kinds of stuff like that. She couldn’t just bring home a nice dweeb.”