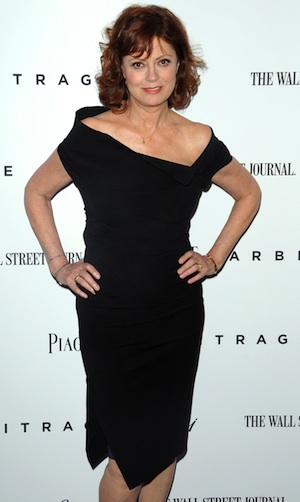 Susan Sarandon is no stranger to politics and speaking her mind. Sarandon made headlines again today for comments she made about Republican presidential nominee Mitt Romney. Susan was a guest on Joy Behar’s Say Anything! show on upstart network Current TV, and she made it perfectly clear she does not agree with Mitt Romney’s viewpoint on publicly funded social programs.

On the show, Joy Behar asked Susan Sarandon about her thoughts on the recent Mitt Romney gaffe — Romney was unknowingly recorded at a fundraiser at which he made the following remarks about the nation’s low-income voters:

“There are 47 percent of the people who will vote for the president [Obama] no matter what. All right, there are 47 percent who are with him, who are dependent upon government, who believe that they are victims, who believe the government has a responsibility to care for them, who believe that they are entitled to health care, to food, to housing, to you-name-it. That … that’s an entitlement. And the government should give it to them. And they will vote for this president no matter what … These are people who pay no income tax.”

Sarandon laughed as she replied, “I’m so entertained. I’m very happy that he’s just so entertaining. I don’t know if it’s going to cost him [the election], I mean, I think a lot of people agree with him in seeing things that way. I guess it will mostly affect the swing voters, and I think it’s an interesting few days on the campaign trail to see how he deals with that. But I don’t think [his speech] was really new information.”

Susan Sarandon and Michael More hacked off at phones >>

Behar continued and agreed with Sarandon that Romney’s remarks were not shocking to most people, but nonetheless painted the Republican Presidential nominee as Ebenezer Scrooge — the miserly, rich character from Charles Dickens’ classic story, “A Christmas Carol.” Sarandon nodded at Behar’s characterization and said, “Well, I think that’s what he is … and a lot of the people he’s talking about pay taxes, so I don’t know what he’s thinking.”