In Blackberry Winter, her third novel, Sarah Jio once again writes of love, loss, and the powerful connections between people that can span generations. 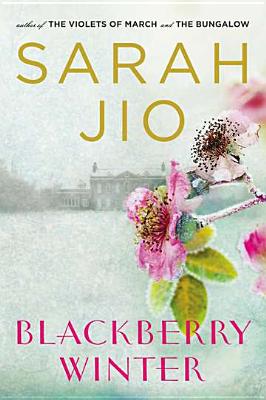 In May of 2010, Claire Aldridge wakes up to snow blanketing Seattle. Such severe weather is unexpected so late in the year, but not unprecedented. Known as a “blackberry winter,” Seattle experienced a similar storm nearly 80 years earlier.

As a features reporter at the Seattle Herald, Claire is assigned a story on this freak weather and its counterpart in the past century.

Still reeling from a personal loss and the chaos it has caused in her marriage, Claire’s heart isn’t in this project, until she finds a story in the archives, one not even reported on by her own paper.

In 1933, during a storm, a 3- year-old boy went missing while his mother was at work. Claire is determined to shed light on this mystery, to find out what happened to the missing boy.

Blackberry Winter alternates between Claire’s story in the present and Vera Ray’s story in 1933. As an unwed mother during the Great Depression, Vera Ray has little choice but to leave her young son, Daniel, alone while she works nights as a maid in a fancy hotel. The night of the storm, Vera Ray returns home to find her son gone and his beloved teddy bear out in the snow. Vera Ray’s life is turned upside down by this loss, nothing will ever be as it was.

Sarah Jio is a master of the dual time period novel. In Blackberry Winter, as in all of her books, the past and present intertwine in a way that makes both of them more meaningful. At first glance it seems that Vera Ray’s story is a tragedy, but one with no real bearing on the present. After all, she is long gone, and chances are good that even Daniel may no longer be around.

Their story, though, offers Claire the possibility of redemption, of reclaiming her life, even if only through allowing her to feel another’s pain instead of just her own.

Readers will quickly be caught up in Claire and Vera Ray’s lives, as Jio’s empathy for her characters spills through the pages and will be loathe to put the book down until they know just how the women’s stories end.