Pink wants the haters to shut up about Miley Cyrus’ hair ’cause she loves it — and no, she doesn’t think Miley copied her. 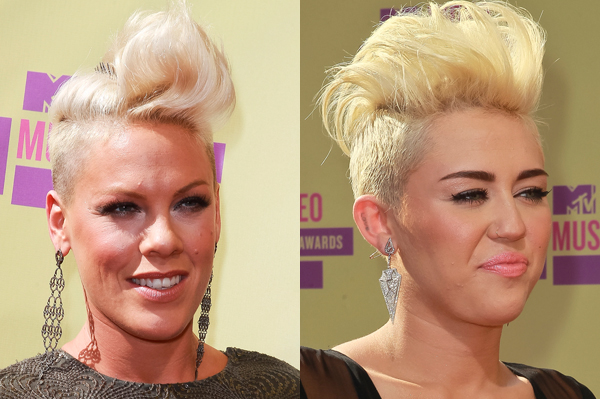 Some Hollywood starlets might balk when another celeb “copies” their look, but not singer Pink. The singer — on the promotion trail for her new album The Truth About Love — told the Today show that she likes Miley’s new, shorn ‘do.

“Everyone has long, brown hair,” Pink said. “When two girls get fearless and shave their heads, it’s a big deal. I think we’re just a little more daring.”

Cyrus dyed her brown hair platinum blonde in August and then had it cut into a short asymmetrical style a few days later. The look drew comparisons to Pink’s longtime hairstyle, though the talk really picked up when the pair wore almost identical hairstyles at the 2012 MTV Video Music Awards.

“I think she’s beautiful,” she said, adding that she doesn’t think Cyrus “stole” her look. “I think she rocks it way harder than I do.”

We’re sure Cyrus is glad to have a famous face in her corner, especially since some fans have expressed their dissatisfaction over her choice of ‘do.

“Hahahahahahahahahahah. Miley Cyrus looks like she has a dead rat on her head. Death by bleaching, too,” one fan tweeted.

“In case you missed it, Miley Cyrus butchered her hair this weekend so at least you’re probably having a better Monday than her!” another wrote.

The former Hannah Montana actress fought back on the comments with a few tweets of her own.

“My dad @billyraycyrus used to tell me “opinions are are like a** holes every body has one.”