SheKnows brings you this exclusive look inside the wedding dance scene from the new movie End of Watch, starring Anna Kendrick and Jake Gyllenhaal.

When you’re a cop working the dangerous drug-infested streets of Los Angeles, the last thing you need to worry about is getting the girl.

Well, Jake Gyllenhaal, who plays police officer Brian Taylor, doesn’t seem to have a problem with that. In this exclusive scene from End of Watch brought to you by SheKnows, viewers can see that this hot rookie has everything a man could ever want.

Taylor Swift’s new song might be about Jake Gyllenhaal >>

His pretty bride is Janet, played by Anna Kendrick. And here, we have the chance to see them dance at their wedding for the first time.

Kendrick and Gyllenhaal do an adorable choreographed dance to Salt-N-Pepa’s Push It. We love the 80s! Clearly in love and perfect for each other, this new union can only mean trouble in a film about drug cartels and rookie cops. Gyllenhaal’s character is the newest member of the Los Angeles police force. He’s tough, strong and a little bit naive to the dangers the city has to offer. 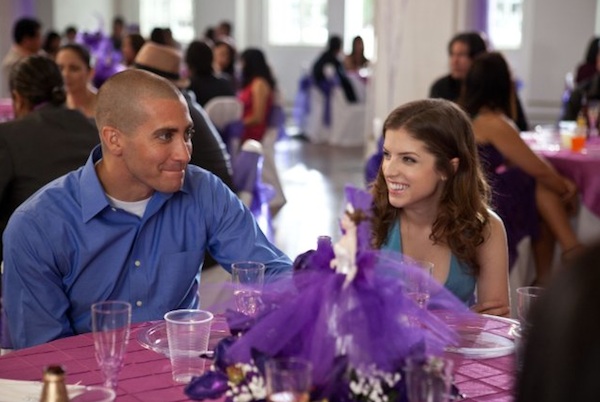 When Brian goes back out into the field and discovers — along with his partner Mike Zavala (Michael Pena) — that the drug cartel is more corrupt than ever, things don’t look as safe as they should be for his new wife.

End of Watch is directed by David Ayer, the writer of Training Day and The Fast and the Furious. The film releases into theaters Sept. 21.