Ahhh… We can all breathe a sigh of relief because our favorite forensic anthropologist and special agent couple are back and uncovering mysteries one vertebrae at a time. Bones had its Season 8 premiere and here are all the dirty details you missed! 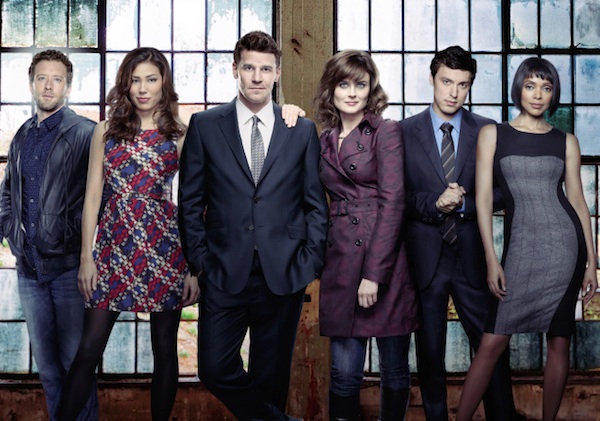 Season 8 begins with a blonde Dr. Temperance Brennan (Emily Deschanel) sitting in a park with her daughter, when her father Max tells her it’s time to leave again. It isn’t safe to stay in one place too long. She is clearly still on the run after being framed for murder last season.

Back at the lab, Angela (Michaela Conlin) is trying to crack the code that would explain how Christopher Pellant was able to put Brennan in security footage and frame her for murder, while Agent Seeley Booth (David Boreanaz), now a desk jockey, argues with his boss, Flynn. He thinks Flynn is spending way too much time looking for Brennan and not enough effort figuring out how to put Pellant in jail.

While in hiding, Brennan makes an anonymous call to the cops about a body she found in the woods. This leads her team to discover an already excavated body of bones. Angela notices a flower called a snowdrop which means “have hope,” and insists that Brennan has been at the crime scene and is the one who dug up the remains. Angela admits to Booth that she’s been communicating with Brennan, but refuses to tell him how.

The body is revealed to be Carol Morresy, Pellant’s old high school guidance teacher. With this news, Booth goes off the grid to investigate. At his hotel, a woman sneaks into his room and they wrestle. Just as he’s about to punch her in the face, he realizes she’s his wife. They kiss and are dramatically reunited. 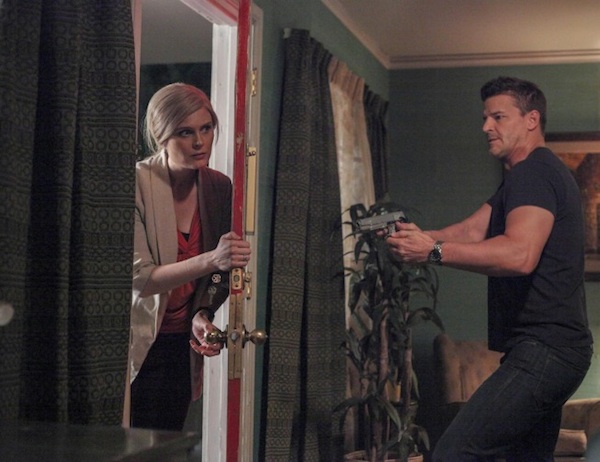 Meanwhile, Angela has proved that Brennan’s electronic signature was forged, but cannot prove it was Pellant who did the forging. However, Dr. Sweets is able to prove that Pellant forged a letter of recommendation from Carol Morresy so he could get into Standford, and assumes he killed her to cover his tracks.

Angela admits to Hodgins that she’s been communicating with Brennan through the use of symbolic flowers, and asks Hodgins to leave a message for her at their designated drop-off point: a tombstone at a graveyard (it doesn’t seem clear why Hodgins has to go instead of Angela). While there, Hodgins runs into Pellant, loses his cool and chokes him until Pellant passes out. All the while, Pellant gives him a creepy, knowing smile. Hodgins throws him down and runs off.

Angela reveals to everyone the communication she had with Brennan, and Hodgins admits that Pellant was at the graveyard, but swears he did not interact with him. Alone with Dr. Sweets, Hodgins reveals he choked Pellant and that he got the feeling Pellant wanted him to kill him.

When Max goes to the graveyard to retrieve the message, he knows Pellant is there. He returns to the cabin where Brennan and Booth are staying and switches cars with Booth in an attempt to lead Pellant away from Brennan.

Later, Hodgins sneaks Brennan into the lab, and she’s finally able to examine the remains herself in an effort to link the crime back to Pellant. While she tries to discover how Carol Morresy was murdered, Booth convinces Flynn to arrest Pellant for hacking into the FBI computer system.

Bones determines that the murder weapon was a Japanese sword, owned by Pellant’s father. They’ve finally caught him! As Pellant steps out of the police car in cuffs, Max warns Booth, “This guy, Pellant, needs killing.”

Angela is finally able to break the code Pellant used to frame Brennan with the security camera footage. Now Brennan can resume her life with her family and her work at the Jeffersonian.

Celebrating commences at the Booth home in the evening. Flynn is moving to the domestic terrorism unit and Booth can quit being a desk jockey. Booth takes a moment to thank Angela for helping him get his family back. When Booth and Brennan finally have a moment alone — her hair back to normal — she apologizes for running out on him, though she knew it was the right thing to do.

Suddenly, a phone call brings them back to the office where they discover records indicating that Christopher Pellant is not who he seems to be. Though they can’t prove it, he tampered with files and made it appear as if he were an Egyptian citizen. Now, he’s being taken to Egypt immediately. Brennan makes sure she gets in one good slap, but before he leaves, Pellant gives her a marigold flower to represent pain and grief. Looks like this won’t be the last we see of Pellant. Maybe Max was right. This guy does need killing.

There are still lots of premieres to come! Don’t forget to DVR these…

Sherlock Holmes comes to the 21st Century in Elementary

Arrow is the hand of justice in action-packed preview