The Vampire Diaries’ Elena, Stefan and Damon are kicking off Season 4 with some serious drama. Elena’s humanity is slipping through her fingers, and the boys are bearers of bad news. 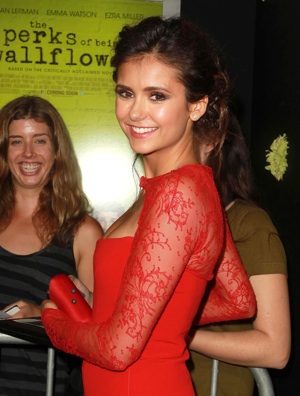 Elena has turned into The Vampire Diaries version of Sleeping Beauty. This season, she’s going through a serious transformation. She’s on her way to becoming a bloodsucker, and there’s nothing anyone can do to stop it. Or is there?

The CW has released a clip from the show’s season premiere (“Growing Pains”), in which Elena learns the truth about herself. The good news is she’s surrounded by two hot guys (Damon and Stefan). The bad news is her humanity is waning.

“Am I dead?” That’s the question Elena needs answered. She has vampire blood running through her veins and doesn’t understand why. She learns that while she was knocking at death’s door, Matt managed to survive — to Damon’s chagrin. He’s more than a little upset that Matt’s alive and kicking.

Stefan tries to explain the situation to a confused Elena:

“When Jeremy brought you to the hospital before all this happened, your injuries were worse than anyone knew. Meredith Fell made a choice. She used Damon’s blood to heal you.”

Damon chimes in: “And when Rebekah ran Matt’s truck off the road you had vampire blood in your system, Elena.”

Check out the “Alive” clip from The Vampire Diaries below:

30 mins ago
by Scarlett Harris