Beauty and the Beast is coming. The series premiere is right around the corner, and we’ve got a clip from the debut episode. It includes the tumultuous first meeting between the title characters. 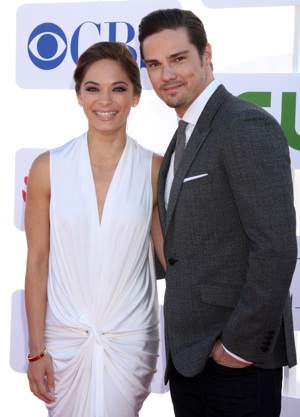 Next month, The CW will unveil its small-screen adaptation of Beauty and the Beast. Loosely based on the 1987 series of the same name (starring Linda Hamilton and Ron Perlman), this update features Kristin Kreuk (Smallville) and Jay Ryan (Terra Nova) in the title roles.

The network has released a new clip from the pilot promoting its October premiere. It features a heated exchange between Catherine Chandler (Kreuk) and Vincent Keller (Ryan).

Catherine suspects Vincent of killing a woman, but he swears he’s innocent. In fact, he claims she was poisoned and he tried to save her.

Before you know it, Catherine discovers that she and Vincent share a past. Years ago, her mother was murdered, and she only escaped a similar fate thanks to a “beast-like” figure. It turns out that Vincent was her knight in monstrous armor.

This incarnation of the Beast is a little different from the past versions. Vince doesn’t look like an animal all the time. His physical appearance changes when his emotions are heightened. This shift is due to a chemical imbalance, which causes him to be unstable. Because of his condition, he’s opted to live off the grid. As far as the world knows, Vincent Keller is a dead man.

Twisted tale: First clip of CW’s Beauty and the Beast >>

Check out the “Confrontation” clip below: