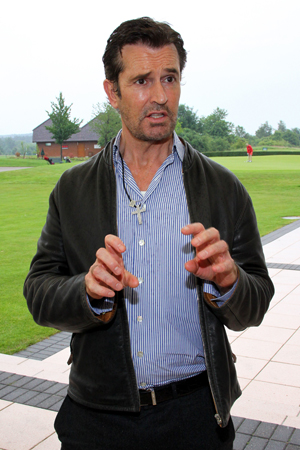 Actor Rupert Everett won the hearts of moviegoers when he played the sassy and sweet gay friend in My Best Friend’s Wedding, but these days he’s known more for his outspoken comments.

In a new interview with the U.K. Sunday Times magazine, Everett says that his mom still hopes he’ll come around to marry a woman and have children.

Jay-Z: Gay marriage is the right thing to do >>

“She thinks children need a father and a mother and I agree with her,” he said. “I can’t think of anything worse than being brought up by two gay dads.”

“Some people might not agree with that. Fine! That’s just my opinion,” he said, adding that he’s not part of the “gay community.”

GLAAD quickly jumped on the actor’s words and issued a statement.

“Children aren’t hurt when raised by caring gay parents, but they are when uninformed people in the public eye insult their families.”

This is hardly the first time Everett has irked gay rights groups. In 2009, he attracted criticism for claiming that his coming out ruined his career.

“It’s not that advisable to be honest. It’s not very easy. And, honestly, I would not advise any actor necessarily, if he was really thinking of his career, to come out,” he told the U.K. Daily Mail.

Will Carrie Underwood’s coming out in support of gay marriage hurt her career? >>

Everett added that he found peace with the situation, though.

“I think, all in all, I’m probably much happier than they are. I may not be as rich or successful, but at least I’m vaguely free to be myself.”