Eric Stonestreet takes his baseball seriously. How seriously? He’s willing to get kicked out of the stadium to protect his team! 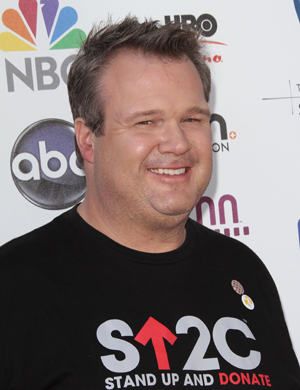 Eric Stonestreet takes his baseball very, very seriously. The actor — who plays mild-mannered Cam on Modern Family — was reportedly kicked out of a Dodger’s game on Sunday night, according to TMZ.

According to eyewitness video, Stonestreet exchanged words with a St. Louis Cardinals fan after the fan heckled a Dodger’s player. Security quickly stepped in to diffuse the situation and asked both men to leave the stadium. He was later photographed speaking to security.

As for what the actor has to say about the whole thing? He took to Twitter to make a joke out of it.

“i did NOT get kicked out of the Dodgers game last night. did i get escorted to the top of the stairs by security? yes. yes i sure did,” he tweeted.

Stonestreet is gearing up for the fourth season of his hit ABC show, scheduled to debut on Sept. 26 with the episode Bringing Up Baby. He — and the rest of the gang — will also take turns guest-hosting Good Morning America in the week leading up to the new season, according to ABC.

Modern Family gears up for a new addition in fourth season >>

We’re pumped to see the show back for new episodes, especially since their contract dispute put a new season in jeopardy. Turns out all of the main cast members — including Stonestreet, Sofia Vergara and Jesse Tyler Ferguson — wanted a hefty pay raise. They even united to “walk out” on the first day of filming.

“We haven’t been able to reach a deal yet,” a source told E! in July. “The cast was expected to show up today. Producers were surprised.”

Producers eventually caved and gave the cast their requested $200,000 per episode.