Clint Eastwood doesn’t care that the rest of the world thinks his speech to an empty chair at the Republican National Convention was totally weird — in fact, he truly doesn’t give a crap. 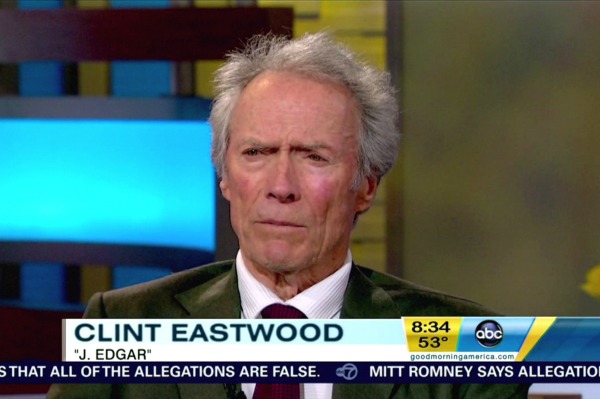 America’s number one curmudgeon Clint Eastwood stands by his super-weird speech at the Republican National Convention last month, in which he addressed an empty chair as President Obama.

The actor was on Good Morning America to promote his latest flick Trouble with the Curve when the talk turned to politics.

“There is something about the aging process that makes you give a crap less,” he said in his first televised interview since his bizarre speech at the Republican National Convention.

Clint Eastwood is a pro in Trouble with the Curve >>

“They’re [other speakers at the convention] all looking at Teleprompters and stuff and I say I don’t want to do that. I didn’t have my glasses with me, so I would have probably not been able to read it anyway.”

“I kind of thought I’d do this as sort of an oddball thing,” Eastwood said. “Anyway, everybody seemed to have a good time with it. That’s all that matters.”

Later on an interview with CNN Eastwood said, “One advantage of being my age is that, you know, what can they do to ya? You just have fun and do what you think and then you can say what you think, you don’t have to edit yourself.”

Will Eastwood’s RNC appearance hurt his new movie at the box office? >>

As far as President Obama claiming to be a fan of Eastwood’s, the actor joked, “Well that’s his bad judgment. Actually, he seems very charming to me.”