SheKnows brings you this exclusive clip from the new indie comedy, The Oranges, the story of a girl who returns home after five years only to find her parents are more up in her business than she wants them to be.

In this exclusive clip from the new indie comedy, The Oranges, Carol Ostroff (Allison Janney) is mom to Nina Ostroff, played by Leighton Meester of Country Strong and Gossip Girl. Let’s just say these two aren’t on the best of terms. They haven’t spoken in half a decade.

The Help’s Allison Janney takes on The Big C >>

After five years away from her family, Nina has suddently decided that this Thanksgiving she’s coming home. Fresh off a breakup with her boyfriend, she takes comfort in the arms of her parents’ best friend, David, played by Hugh Laurie. He’s not only besties with her mom and dad, he’s the dad of her childhood bestie, too. Confused, yet? That’s half the fun. The Oranges is a bit of a mixed-up Graduate set in the suburbs of New Jersey. 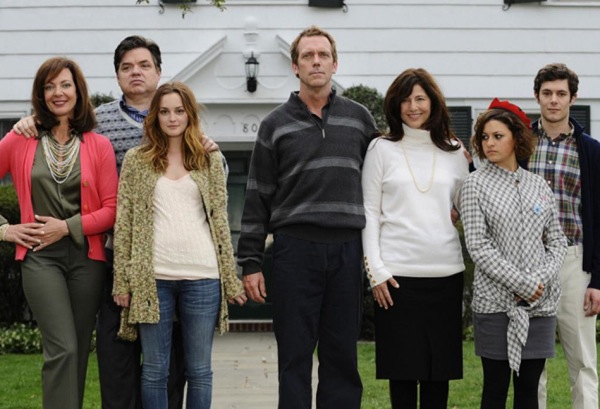 It’s about to get juicy

In this scene, Janney’s character follows her daughter to a local hotel in hopes of catching her in the arms of someone, but when she finds out it’s her husband’s best friend, things get complicated.

The homecoming is made worse when everyone in the two families finds out about this secret relationship. The culprit? Nina’s best friend from childhood, Vanessa (Alia Shawkat), who is also the daughter of her beloved.

The Oranges is a quirky comedy about suburban relationships that is sure to keep you on your toes. When a girl comes home because she doesn’t want to deal with her problems, they soon become everyone else’s, too. Catherine Keener plays David’s wife, Paige, and Adam Brody plays his son, Toby.

The Oranges is set to release Oct. 5, so it should be around for Thanksgiving.