Each month, Candace of Beth Fish Reads invites you to meet a fascinating new person by reading a buzz-worthy memoir or biography. In her third memoir, award-winning author Rachel Cusk turns her thoughts to the dissolution of her marriage and how separation defined and shaped her new reality. 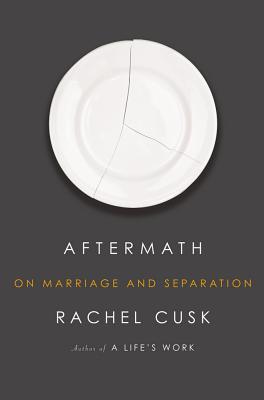 After Rachel Cusk’s husband walked out on her, she began to think of marriage as a jigsaw puzzle. From a distance, marriage can look beautiful and whole, but on closer inspection, such relationships may really be made up of separate pieces. When the puzzle is undone, all that is left is a disconnected jumble. In a series of seven essays, capped by a short story, Cusks explores the immediate aftermath of her separation by trying to make sense of the bits left behind.

Aftermath is not a strictly chronological tale. Cusk intersperses her own journey with more general musings about a host of “hoods”: womanhood, motherhood, parenthood, wifehood, singlehood, and daughterhood. She discusses these many facets of being a woman and what they mean to her and how they’ve been portrayed through, for example, the Greek classics and the Bible.

One of the striking changes for Cusk was her feeling of being disconnected from the part of her life that was shared as couple. As she tells a friend:

[A]ll of my memories are being taken away. Nothing belongs to me any more. I have become an exile from own history…. I no longer have a life. It’s an afterlife; it’s all aftermath. (p. 87)

Her new reality meant not only that she became a single mother but that photographs, familiar haunts, vacations, and routines had ceased to be sources of fond recollections, morphing instead into “lacerating shards of nostalgia.”

In the essay “Couples,” Cusk reflects on how being separated made her hyperaware that “everywhere people are in couples,” speaking a secret language that solidifies their relationship. She felt left out, on the outside. Even in church she sensed that she had been marginalized; when she looked at the congregation of families, she imagined their judgment.

By the end of this short memoir, Cusk hints at moving forward. She talks about her therapist and two men who entered her life. Although she hasn’t yet imagined a happy future, she is taking steps to find her way again.

Aftermath is not a light story of second chances and newfound joy but an introspective treatise on the impact of separation. Whether you have personal experience with divorce, are happily married, or have never been married, Rachel Cusk’s memoir will help you understand the complex ways in which women’s lives are changed when a marriage ends.