Milla Jovovich takes the top spot at the box office this weekend in Resident Evil: Retribution as she fights against the Umbrella Corporation and the undead. 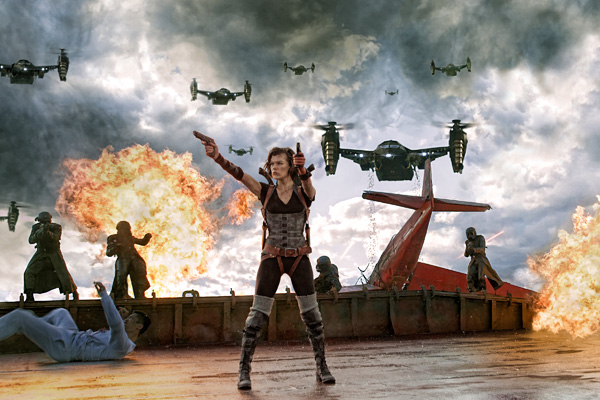 The fifth installment in the popular Resident Evil series has a femme hero who will kick your booty if you don’t comply with her way of running the universe. Milla Jovovich stars in the action flick that earned an estimated $21.1 million in box office returns this weekend, according to Deadline Hollywood.

Everyone’s favorite clown fish is back on the big screen in search of his adventurous son, Nemo. Voiced by Ellen DeGeneres, Alexander Gould and Albert Brooks, this 2003 hit is sure to warm hearts again — but this time in 3D. The film earned an estimated $17.5 million, bringing it in at No. 2.

Finding Nemo swims its way back into theaters >>

After winning the number 1 spot twice in a row, this spooky fright film by Sam Raimi dropped to No. 3 this week with $5.7 million in returns. When a young girl buys an unusual box at a garage sale, more than a few things go wrong.

Possession doubles up on box office No. 1 spot >>

The Prohibition movie about making booze and shooting enemies is still among the top picks for audiences this weekend. Starring Tom Hardy, Guy Pearce and Shia LeBeouf, this action drama is said to be violent and bloody, despite all the gorgeous faces. It earned $4.2 million this weekend.

Tough guys with guns seems to be a favorite in Hollywood of late with this ode to Sly, Arnie and Chuck Norris. Earning an estimated $3.1 million in box office returns, the sequel is about avenging the death of one of their own. It co-stars Jason Statham, Jean-Claude Van Damme, Jet Li and Bruce Willis.

The uber adorable zombie kids movie ParaNorman will get you and the kids in gear for Halloween with its spooky stop-motion animation and fun comedic vibe. Voiced by Anna Kendrick, Casey Affleck and Leslie Mann, the film earned $3 million at the box office bringing it in at No. 6.

The Bradley Cooper romantic drama about a man who steals another writer’s book and passes it off as his own hasn’t been as well received by critics as expected. The film, starring Dennis Quaid, Zoe Saldana and Jeremy Irons, grossed an estimated $2.8 million, bringing it in at No. 7.

Movie review: Truth or fiction — which would you choose? >>

Move over Matt Damon, we’ve got Jeremy Renner and his awesome chest! If you haven’t seen the latest installment of the espionage-on-the-run series, this is a must-see movie. Co-starring Rachel Weisz and Edward Norton, the film earned an estimated $2.7 million in box office returns this weekend.

Movie review: The spy who I wished loved me is in The Bourne Legacy >>

The Odd Life of
Timothy Green

This uber cute family flick about parents-in-training stars Jennifer Garner and Joel Edgerton. When a boy magically appears to inexperienced parents, things get a little strange in this cute small town. The Disney film earned $2.5 million in box office returns this weekend.

Movie review: The art of organic parenting in The Odd Life of Timothy Green >>

Tired of all the politics talk? Try The Campaign, the comedy starring Will Ferrell and Zach Galifianakis that pokes fun at the whole process. Perfect for an election year! This dumb comedy is full of laughs and maintains its top 10 status with an estimated $2.4 million in box office returns.