An attack on a British base in Afghanistan killed two Marines — and the Taliban says it will keep striking until it kills Prince Harry. Should his superiors pull him out to protect the troops? 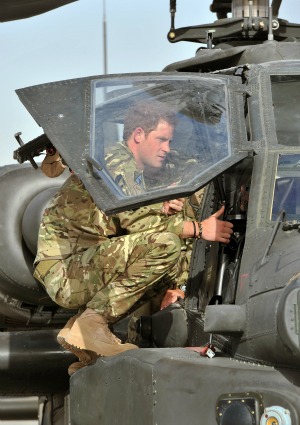 Yesterday’s deadly attack on a military base in Afghanistan killed two Marines but missed the Taliban’s intended target: Prince Harry.

Prince Harry’s presence on the base is being faulted for the incident.

The party’s over as Prince Harry heads to war >>

“We attacked that base because Prince Harry was also on it and so they can know our anger,” Taliban spokesperson Qari Youssef Ahmadi told the Associated Press.

“Thousands more suicide attackers are ready to give up their lives for the sake of the Prophet,” he said, implicating an American-made anti-Islamic film as another motive.

While Harry was on the base, officials say he was never in any danger.

A senior Army officer told the Sunday Telegraph, “This was a determined attack which achieved its aim of getting global press coverage. They are masters of propaganda. But they are deluded if they really think they can storm Camp Bastion and kill or seriously injure Prince Harry. The attack was never going to succeed but in reality that was never really its aim.”

But with the deaths of two Marines comes the inevitable question: Is Prince Harry’s presence putting lives in danger? The British Ministry of Defense claims no.

“The threat to all our service personnel is continually assessed and all measures taken to mitigate it,” an MoD spokesman said. “The deployment of Captain Wales has been long planned and the threat to him and others around him thoroughly assessed. Any risk posed by his deployment, based on the capability, opportunity and intent of the insurgency, is continually reviewed. Last night’s attack was dealt with swiftly by International Security and Assistance Force (ISAF) personnel, including UK forces, and a number of insurgents were killed.”

“A clearance operation has been conducted and work to assess and investigate the incident continues.”

Not a great way to mark the prince’s 28th birthday.