The singer has never done things the same way as everyone else, and this was no different. She debuted her new perfume by sitting in a giant perfume bottle and being tattooed in front of fans. 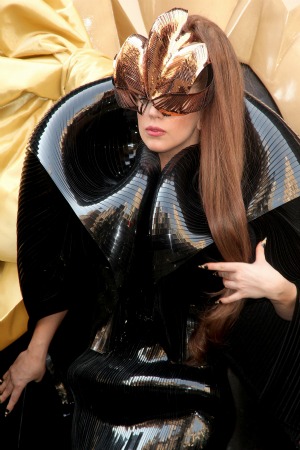 When Lady Gaga announced she would be releasing a new perfume, we guessed she wouldn’t be doing it the same way as most people. And boy, were we right. On Thursday, the singer showed up at the premiere housed in a giant replica bottle of her new perfume Fame. But that wasn’t all.

“The avant garde pop star was in a large bottle — a replica of her Fame fragrance — appearing in the transparent glass where attendees took photos and watched the singer get a tattoo on her neck,” said Mesfin Fekadu with the Associated Press.

Not only did she manage to pull off the stunt, but she did it in the Solomon R. Guggenheim Museum in New York Thursday night. According to Fekadu, she entered the museum in a convertible, then posed for pictures with fans.

“Inside, she laid in the bottle in a sparkly top, black skirt and red wig,” according to Fekadu. “Then she took off some clothing and a wig — now appearing in lingerie, including a thong — and began receiving a tattoo of the back of her neck (she shaved the bottom half of the back of her head this week).”

There were only a few hundred people at the black-tie event held at the museum. Celebrities in attendance included Yoko Ono, Marc Jacobs, Paris Hilton, Michael Strahan, Jason Wu and Lindsay Lohan. But then it got weird.

“Gaga applied makeup and played on an iPad inside the bottle, where she was joined by four others,” said Fekadu. “Edith Piaf played in background, as did David Bowie’s ‘Fame’ and various songs that featured Kanye West. She got her tattoo — and danced in her seat — as West’s latest hit ‘Mercy’ blasted in the background.”

The event was rounded out by a short film, cleverly entitled the Lady Gaga Film, for the fragrance, directed by Steven Klein.