Brandi Carlile’s wedding is a reality, though the bride and her bride have a hard time believing it! As she prepares for her Saturday ceremony, the singer speaks out about being a role model for young lesbians hoping for love — legally recognized love, to be specific. 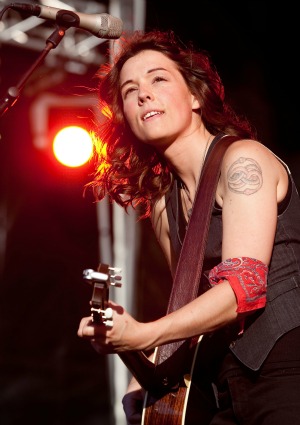 Brandi Carlile and her blushing bride are set to marry Saturday in a ceremony that will be legally recognized. In awe that her dream of a legitimate wedding is actually happening, the singer hopes to set an example for other gay girls.

“It was a crazy feeling while I was filling out the paperwork because I felt like I was breaking a law, like somebody was going to come in and say, ‘You know you can’t have this!’ It was so exciting… we have a marriage license in Massachusetts,” Brandi Carlile shared with the Associated Press.

The Story singer and Catherine Shepherd plan to marry first in Boston, later throw a party in Seattle, and also celebrate in London next year!

Giving thanks for those who have worked so hard to make gay marriage a reality, at least in some states, Brandi Carlile said, “It’s so surprising, and so hard fought… I wouldn’t have been able to picture myself married or successful or pursuing my dreams if there hadn’t been other people that had done it before me, like role models, and that’s why talking about it is so important.”

Speaking of setting an example, she continued, “If a 14- or 15-year-old girl reads this in a small town, who’s gay, then she knows that someday she might get to go get a marriage license and get married, and there’s no reason she should stop dreaming about a white wedding because I didn’t.”

Will Carrie Underwood’s support of gay marriage hurt her career? >>

“There’s a political undercurrent around equality right now that just demands a voice, voices to rise up and say, ‘Yeah, I’m one of these people too and I believe this thing as well,'” added the 31-year-old. “So that’s what we’re doing right now. We’re on the cusp of a civil rights movement and so I have to be a part of it and I want to be.”

Early congratulatory wishes go out to Catherine and Brandi Carlile on their weekend wedding!