CariDee English, past America’s Next Top Model victor, talks about the harsh realities of being thrown into the fashion world as a newbie — with no Tyra Banks to help out! 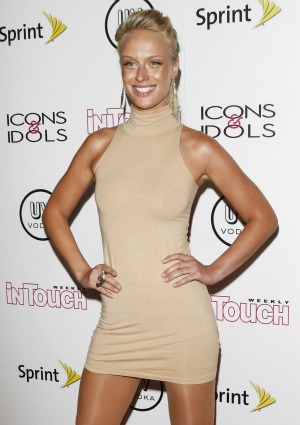 CariDee English is one of the few who know what it’s like to win America’s Next Top Model. While amazing in the moment, the reality of landing a contract as fresh meat for the fashion world to chew up isn’t all it’s cracked up to be, she says. And Tyra Banks is often no help at all!

In light of the news that former contestant Jael Strauss has become a meth addict and is turning to Dr. Phil for help, CariDee English has decided to speak out about the downside of Top Model.

“Tyra won’t do anything [for Jael],” the 27-year-old ANTM winner bluntly commented to Gawker. “She provided a wonderful platform for girls to have a chance at their dream, but after[ward], there is no ‘Tyra Mail.'”

Sharing her experience after winning in 2006, CariDee English continued, “I had to guide myself, and even though I won a model competition, I still had no idea what the modeling BUSINESS was like. I had no idea what the industry was really like. I was famous, but no one wanted to take my picture. And critics and industry love to give us all s**t for not being the next big supermodel.”

“The fashion industry had NO idea how to market us,” the America’s Next Top Model vet continued. “We became instant celebs but had the portfolio of a rookie model. Even though we just were named ‘TOP,’ our place in line at Fashion World was at the bottom.”

“Tyra wasn’t there when the cameras stopped rolling, nor did she reach out … The only person that has reached out to me directly is Nigel Barker,” she added.

Top 10 America’s Next Top Model winners: Where are they now? >>

In regard to “poor girl” Jael Strauss, CariDee English wrote, “Having problems and then getting a hint of fame only make an addiction rise. They should have evaluated her a lot more before letting her on the show. All they saw was a personality good for television. Well, this hopefully will save at least her life and someone watching. Everything happens for a reason. Not to worry, none of us make it out alive.”

What do you think of CariDee English alleging she was abandoned by Tyra Banks and ANTM?