Emma Watson admits to having a bit of trouble adapting to an American accent for her new movie, The Perks of Being a Wallflower. 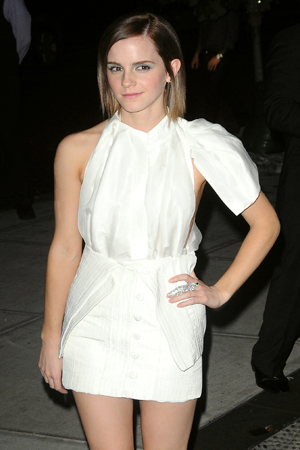 British movie fans like to tar and feather American actors for their botched British accents in film roles, but even Brits have their problems taking on different lilts. Case in point? Emma Watson says it was difficult to put on an American accent for her new film, The Perks of Being a Wallflower.

“The word vinyl, for some reason,” Watson joked to The Hollywood Reporter of which words are hard to say in an American accent. “Vinyl and Olive Garden, I struggled with. I don’t know why. In the movie, Sam goes there a lot.”

Watson plays Sam in the film, a free-spirited high school senior who attracts the attention of the main character, Charlie. The book was immensely popular when it was released in 1999, but Watson said they had to fight to get it made.

“…My agent called me and said actually nobody wants to fund it. No one wanted to touch it with a ten-foot pole,” she told Anderson Cooper on his daytime talk show earlier this week. “I think it’s because it deals with the real deal. It doesn’t put a gloss on any of the real issues of growing up. So, I flew out to LA and I met with Paramount and Warner Bros and Summit and Disney and everyone and was just like, ‘Please.'”

So, who is she more like: Her Harry Potter character Hermoine Granger, or Sam?

“I think for me it was coming from playing Hermione Granger, who’s like this seriously buttoned up, like very prim and proper English schoolgirl, to playing Sam, who’s like on the other end of the spectrum, who’s like running around in fishnet stockings and feather boas and like doing Rocky Horror. She’s a true unique,” she joked.

“Well, it’s funny, I think, because obviously people associate me with Hermione because I played her for so long, but there’s definitely a part of me that’s much more spontaneous and funny.”

Are you pumped for The Perks of Being a Wallflower?