Chad “Ochocinco” Johnson is now free to find as many women on Twitter as he wants: He just filed for divorced from his Basketball Wives bride Evelyn Lozada. 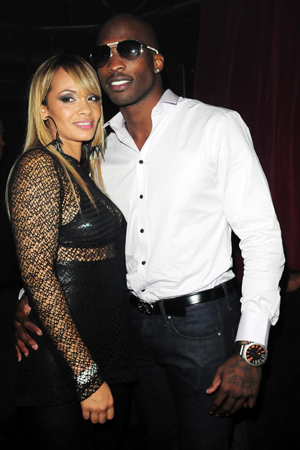 Chad “Ochocinco” Johnson is a real jerk, in case his whole arrest for domestic violence didn’t clue you in to that. The former NFL wide receiver decided to file for divorce from his wife of less than two months, Evelyn Lozada.

Chad Ochocinco loses both his jobs after arrest >>

The abrupt change of heart comes just one week after he tattooed his estranged wife’s face on his calf and wore a shirt that said “I just want to love you” — a message some figured was to Lozada. The reason? RadarOnline is hypothesizing that it has something to do with his alleged mistress, Bianca Zuluaga. The website reported that a car registered to Zuluaga’s mother was spotted outside Johnson’s Miami mansion.

Oh, and she tweeted about it.

“You know you’re a chocolate addict when you ate some last night, and eat some as soon as you wake up in the morning,” she wrote, referring to her nickname for the disgraced athlete.

Yuck. Their little date wasn’t over yet, though.

“iHop with my lover… yummm fattening,” she tweeted later on. Hey, Bianca: Sorry to tell you, but it sounds like you’re far from being the only woman in his life.

Chad Johnson back on Twitter binge: “Don’t feel bad for me” >>

“He is constantly scouring Twitter flirting with women, and if he sees someone he likes he has them direct message their number to him so they can meet up in person,” a source told Radar.

At least Lozada is moving on, though. The Basketball Wives star has been pushing for a divorce since the August incident, telling People that her marriage is beyond repair.

“You can’t repair this,” she said in early September. “Not right now. You just can’t.”

“This is something you should never tolerate,” she added. “I don’t care what the situation is — or who the man is.”