Fandango will sell tickets to The Twilight Saga: Breaking Dawn — Part 2 starting next month. Will you be first in line? 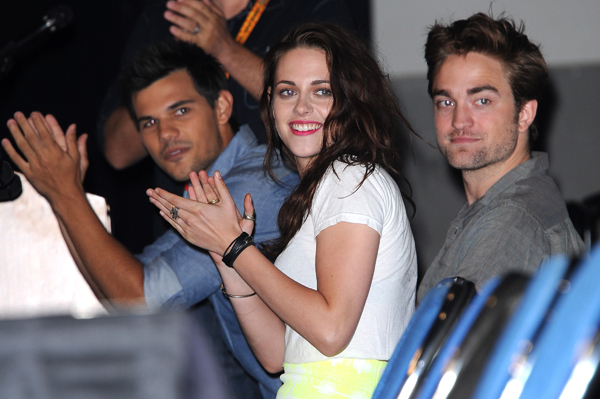 Get your credit cards ready, Twilight fans: Tickets for The Twilight Saga: Breaking Dawn — Part 2  will go on sale starting Oct. 1, a full six weeks before the film hits theaters on Nov. 16.

“Each installment of The Twilight Saga ranks among Fandango’s top pre-selling films of all time,” Rick Butler, Executive Vice-President and General Manager of Fandango, told SheKnows. “With moviegoers telling us that Breaking Dawn, Part 2 is their most anticipated film of the Fall season, we fully expect tickets to go quickly, while our fans rely on Fandango to reserve their tickets when advance sales start on October 1.”

Oct. 1 is also when fans can pick up tickets to special Twilight marathons being held around the country. If that’s not enough, Fandango is giving away a trip to Los Angeles for the premiere.

We’d love to be at that premiere, if only to see the awkward interactions between Robert Pattinson and Kristen Stewart in light of their purported breakup. Stewart told reporters they’ll be “fine,” but that remains to be seen — especially since “sources” claim the 22-year-old actress is confident she’ll win him back.

“It’s still all up in the air. Robert has no idea what he wants to do and he’s dithering over a decision. He loves Kristen, but his family told him to forget about any ideas he has of taking her back,” a source, of course, told RadarOnline. “Time will soon tell and the ball is in Robert’s court. If he can forgive, forget and make the brave decision of letting his heart rule over his pride they may get back together.”

Do you think Robert Pattinson should take Kristen Stewart back?