Amanda Bynes is probably high as paparazzi catch her driving for hours with seemingly no destination after smoking from a pipe. And oh yeah, her BMW is disgustingly dirty. 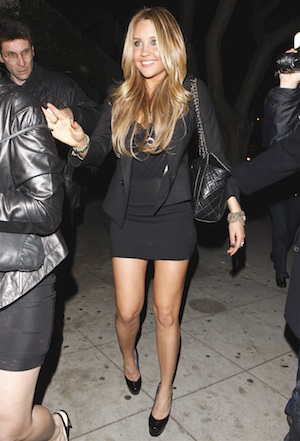 Uh, oh. It looks like Amanda Bynes is the latest Hollywood train wreck. Bynes was spotted early Tuesday morning by paparazzi and their pictures paint a very ugly picture of the clearly struggling Bynes. TMZ obtained photos that catch Bynes smoking some kind of grassy substance from what looks like a marijuana pipe in her car. The photos were apparently taken outside a Baja Fresh parking lot and later a Home Depot hardware store after paparazzi followed her all day.

As the cameras followed Bynes throughout the San Fernando Valley, she reportedly weaved in and out of traffic, spent three hours at a day spa, and was generally just “violating a lot of traffic laws” according to TMZ. It’s unclear where Bynes was when the paparazzi shot photos of the totally trashed and disgusting interior of her luxury BMW. Worse for Bynes, one photo clearly shows what looks like marijuana stuck in Bynes’ messy front cup holder. There is also something white dripping from the center console and lots of what looks to be trash in the passenger seat. TMZ writes, “In one shot, you see what appears to be remnants of marijuana in a cup holder. Some of the nugs appear burnt — as if they had already been smoked.”

Amanda Bynes in 4th car accident since May 5 >>

Bynes’ hot mess personality is a fairly recent development. She was popped for a DUI back in April, a hit-and-run in August, and pulled over in September for forgetting to turn her headlights on. Bynes is scheduled to appear in court next week for the DUI charges from April.

Amanda Bynes has not yet released a statement on Tuesday’s pipe-filled adventure.