Olympian Ryan Lochte and Miss USA Olivia Culpo were seen out together at Fashion Week. We just hope Lochte can prove he is about more than one-night stands. 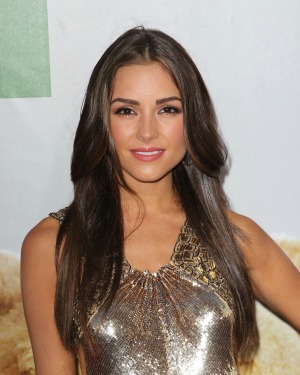 “Things are still very new because they just met, and they obviously aren’t exclusive,” a source told the New York Daily News. But the source said the two “definitely like each other.” According to USA Today, Lochte’s rep didn’t elaborate but didn’t deny the pairing either.

“It’s too early to say they’re ‘dating,'” Lochte’s rep told the paper. “They get along well and they’ve been to a couple events, but to my knowledge, they’re not ‘dating.'” USA Today says that last week, the swimmer told the New York Daily News that he has four requirements in a possible girlfriend:

3. “I don’t want her to always have to be coming to me for everything.”

4. “I want to her to be really independent.”

Last time we checked, Culpo meets all the criteria, and because the two are both in the public eye, they have a lot in common.

While both Lochte and Culpo posted multiple tweets about Fashion Week, neither mentioned the other (but you can bet there were many posts of “Jeah!” on Lochte’s page). However, multiple pictures were taken of the two, including one with Lochte leaning in toward Culpo.

On Friday, Lochte posed for pictures with Culpo and Donald Trump, who runs the Miss Universe organization. Trump seemed to approve of the pairing, even if it’s a friendship. “He’s got lots of medals, just like you,” he told Miss USA, said the New York Daily News.

If Lochte’s mom is right, the swimmer only has one-night stands. But with Culpo, Lochte may realize how lucky he is and up his game.