When Lohan read the script, she reportedly “freaked out” that the movie was poking fun at her. But is that why sources are saying she hasn’t showed up to film her scene? 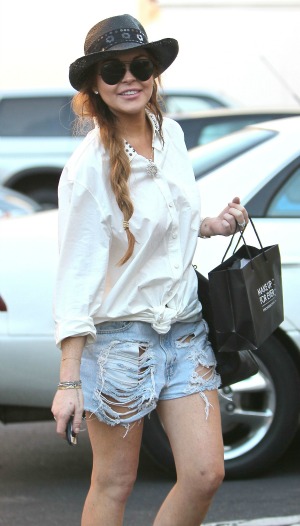 Lindsay Lohan was a big score for Scary Movie 5, the fifth movie in the franchise that started twelve years ago. But it looks like producers may have gotten more than they signed up for with the actress — it seems they are having a hard time getting her to actually shoot her part.

According to the New York Post, a source said Lohan “freaked out” when she read the script and realized her scenes were making fun of her.

“Dimension Films signed Lohan to play a cameo in the horror spoof, opposite Charlie Sheen. But over the past two weeks — as the date for filming approached — Lohan disappeared, blew off rehearsals, missed her flight to the set and even bizarrely claimed she had walking pneumonia,” said the NY Post.

Even though Lohan is only doing a cameo in the film, she has also reportedly missed phone calls related to the scene. Because she is under contract, the only way she could legally not show up is if she were sick.

“Lindsay missed every meeting she had for the film, including script reads and wardrobe meetings,” the source told the Post. “Then she missed her flight to Atlanta on Sunday to shoot the movie. The producers had been getting signs Friday that she was a mess and would not be fit to work.”

The source did say that Lohan finally did show up after being threatened with a lawsuit, and a private plane went to pick her up. Her rep is claiming the story is untrue and that the actress did show up to everything she was supposed to. Reps for the film company, Dimension Films, did not respond to requests for comments.

Scary Movie 5 is scheduled to come out in 2013, and Lohan is currently expected to appear in two other films — InAPPropriate Comedy and The Canyons — which are slated to come out next year as well.