Community may be losing fan favorite Donald Glover, who is close to inking a deal with NBC to headline his own show. 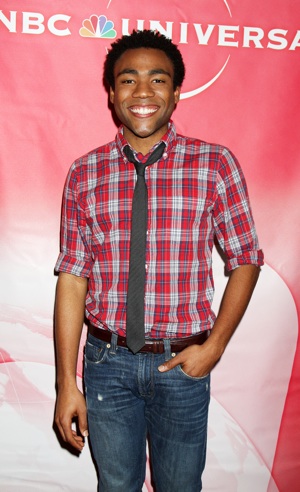 Is Greendale Community College losing Troy Barnes? His alter ego, actor Donald Glover, may be moving on to greener pastures.

Over the summer, Glover has been keeping busy. When he’s not performing concerts as his other alter ego, rapper Childish Gambino, he’s producing TV pilots.

According to TV Guide, Glover is developing a new show that has nothing to do with Community. Glover has partnered with 30 Rock executive producer Matt Hubbard to create a comedy loosely based on his own life.

Glover could headline the series, which is nearing a deal for a put pilot. If the show never sees the light of day, he’ll score a large penalty fee for its not moving forward.

So where does this leave the Greendale gang? The actor is still a regular on Community, and the news has no effect on its upcoming season.

Full Community cast back for Season 4 >>

Community is still Glover’s top priority, which means more Troy and Abed antics. The series returns next month (Oct. 19) for its fourth season, which consists of 13 episodes. That’s essentially half a season, which could mean the end is near. Community was also bumped from its plum Thursday night time slot to Fridays. Everyone knows that’s where shows go to die.

If Community isn’t picked up for a fifth season, Glover already has a job “in second position.” But hopefully it won’t come to that. Six seasons and a movie!

Should Donald stick with Community? Or should he exit, stage left?