The Newsroom star Alison Pill accidentally gave fans a big show on Tuesday. At least she has a good attitude about it. 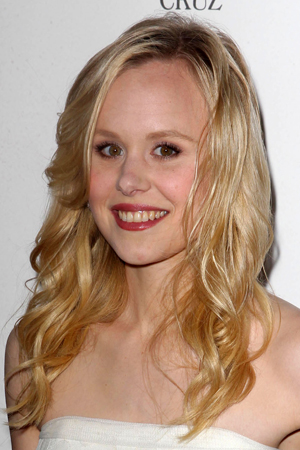 Alison Pill of The Newsroom is feeling a bit of embarrassment today after she accidently tweeted a photo of her breasts to her 15,000 followers. Seem familiar? Tori Spelling’s husband Dean McDermott did the exact same thing a few months ago.

At least Pill has a good attitude about it.

“Yep. That picture happened. Ugh. My tech issues have now reached new heights, apparently. How a deletion turned into a tweet … Apologies,” she wrote on Wednesday afternoon after she took down the nude photo.

Yes, creepers; you can still see it online over at Gawker (NSFW, of course.)

So, what’s with the picture? Pill didn’t explain exactly why she sent out the photo, but we’re going to assume she was sending it to her fiance, actor Jay Baruchel.

The Newsroom bombs with critics >>

“My fiancee is an hilarious dork,” he tweeted after the photo. “Smartphones will get ya.”

The pair — who met when they co-starred in the hockey movie Goon — got engaged in December 2010.

“I’m pretty sure my words were, ‘F*** it, do you want to marry me?'” Baruchel told US Weekly earlier this year of how he popped the question. “To which [Alison] said, ‘Yes, of course!'”

Did Aaron Sorkin fire his writers on The Newsroom? >>

Baruchel plans to wear a kilt to the wedding. Why? Your guess is as good as ours.

“I’m really excited to see all the … hairy, chubby legs,” he joked. “I just hope my groomsmen wear underwear!”

And let’s hope Pill is wearing a bra for the wedding pictures. We kid — this will probably help her career a lot more than it’ll hurt.