Heidi Klum blames the “horrible” state of her divorce on Seal because he keeps running his mouth to the press. Can the couple make peace for the sake of their kids? 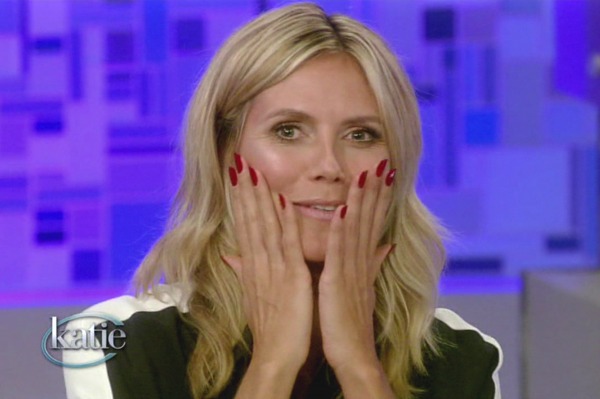 Heidi Klum is fuming over the rumors started by her ex-, Seal, that she cheated on him with her bodyguard, and she blames the “horrible” state of their current relationship on his loose lips.

In an appearance on Katie Couric‘s new talk show, Katie, Klum spoke out about Seal’s allegations.

“I don’t know if we’re the greatest friends right now, especially because of the things that he said,” Klum revealed. “I just saw him on … on Sunday. We were talking, and we’re in an OK place.”

The Project Runway star vehemently denied cheating with anyone, let alone her bodyguard. But her phrasing was careful. She said, “When we were together, I never looked at another man,” leaving the door open to the possibility that she and her manhandler got it on after Seal moved out.

“It’s not something that I wanted, you know,” she explained about the shocking split. “I’m someone who believes in a fairy tale, and when I said ‘I do,’ I meant forever. But I don’t know, you never know what happens.”

“Life … changes. It’s that road with all those bumps and holes and you trying to struggle through them and … I don’t know, we just couldn’t make it work, you know?”

“I’m just … I want to move forward, I want to be friends with him, I want us to be there for our children,” she continued. “And it’s horrible, we both didn’t want that.”

Klum and Seal split in January 2012, after seven years of marriage. They have three children.