Lady Gaga is being a supportive best friend for photographer Terry Richardson by shaving her head. 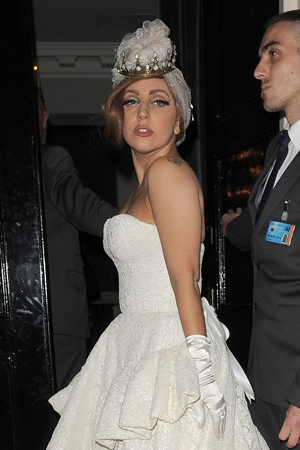 Lady Gaga is total besties with creepy photographer Terry Richardson, so it only makes sense that she’d do something special to commemorate his recently departed mother.

And that special something? She shaved her head in the back.

“I did it for u Terry. I’m sorry about ure [sic] mommy. She has princess die, but were all princess high,” Gaga tweeted on Tuesday night.

Richardson’s mother passed away on Tuesday night at 74. No cause of death was released, but naturally he’s upset. Luckily, he has Gaga’s support — the two became close after he was commissioned to follow her for their coffee table book, Lady Gaga x Terry Richardson.

“Terry was with me for [almost] a whole year, and, gosh, I didn’t hold anything back from Terry … he was with me every minute, every moment,” she told MTV News. “It’s completely unfiltered. He has photographs of me waking up in the morning, brushing my teeth, in the bathroom, in the bathtub, the shower. And the thing about Terry, if you know anything about his photography, is that nothing is staged; I mean, that’s sort of what he is renowned for. He can get you to do things and he can capture things that no one can ever capture.”

The “Born This Way” singer isn’t the only person to shave off her strands: Country singer Kellie Pickler shaved off all of her hair to support her best friend’s fight with cancer. The new shorn ‘do has inspired a Halloween costume for 2012.

“Thinking about being G.I. Jane for Halloween. ;),” Pickler tweeted after the ‘do debut in early September.